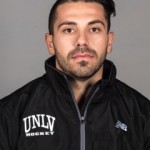 Vignieri Greener will be in his sixth year as head coach of the UNLV Men’s Hockey program. A native of Kenosha, WI, he moved to Las Vegas at an early age, where he played his youth hockey. He started his Jr Hockey career at the age of fifteen in Las Vegas, Nevada playing for Randy Burridge. The following seasons Vignieri Greener played in Traverse City, MI and Victoria, BC. After his Jr career was completed, Vignieri Greener returned home to play for UNLV under Head Coach Rob Pallin. Collegiately, Vignieri Greener was named to the first team All-American once and also a second-team All-American. In his last three seasons for UNLV, Vignieri Greener helped the team reach the regional tournament, a milestone for the young program at the time. During that time he was also apart of UNLV’s unbelievable two-season undefeated streak at home, totaling 36 consecutive wins.

Vignieri Greener began his coaching career for the Las Vegas Jr Wranglers, as well as other Las Vegas-based youth programs, including Pee Wee AA, Bantam AA, U16AA and U18AA, having led his teams to a number of tournament wins, including appearances at the National Tournament.

Vignieri Greener started as Head Coach of the UNLV Rebels, returning to lead his former team, in 2015-2016. Leading the program, with a clear goal to grow, and instill a new culture he began to build a new tradition for the once-powerful program. In the three years since taking the helm, UNLV has over 80 wins, reaching the ACHA D2 regionals, the ACHA D2 Nationals, and moving up from ACHA D2, and leading the program into ACHA D1, where the Rebels reached the National Tournament in their first season.

Vignieri Greener is as passionate about the game as anyone you can find, and spends countless hours every day in trying to make hockey in the Las Vegas community more visible. He strives to not only makes his players better on the ice but off the ice as well.

Vignieri Greener is married to his wife Ashley, and resides is Las Vegas, NV. 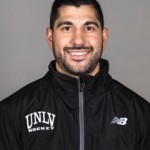 Robone enters his sixth season as the Assistant Coach and Recruiting Coordinator for the UNLV Rebel Hockey program. The Las Vegas native has deep roots in hockey across the Vegas valley and is a 2012 UNLV grad. In his time with UNLV, the Rebels have accumulated a record of 120-47, qualified for the National tournament 4 times, and elevated from the ACHA D2 to D1 in 2017. Prior to coaching at UNLV, Robone assisted the Nevada Storm’s tier Bantam and Midget programs in 2014 and 2015 while graduating 8 players on to junior hockey careers at various levels. Robone was an NCRHA All American at UNLV and coached the UNLV roller hockey program to three ﬁnal fours and a 82-27-3 record from 2013-2015.

Player Board of Directors / Team Staff 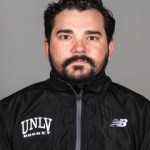 Castro served as President of UNLV Sports Clubs for 3 years and President of UNLV Hockey for 6 years. Castro has overseen the growth of the sports club organization at UNLV, and helped raise the organizations budget each year, to help build a lasting foundation for future success for all the sports clubs organization. During Castro’s time as president, he has also served as the president for the UNLV Hockey club, as they continue to be the flagship organization under the UNLV Sports Club banner.
In his time as Director of Operations for the UNLV Hockey program, Castro has over seen the growth of the Rebel Hockey program, and helped to build a lasting legacy, both with an eye to solidify the future financially through building relationships within the community, and with the overall student and fan experience. He has dedicated countless hours to help facilitate the operations of the UNLV program, that is constantly growing. During his time, UNLV hockey has grown from a ACHA D2 program, to a top tier ACHA D1 program. Arturo has helped to create a lasting brand and set the program up for future success. 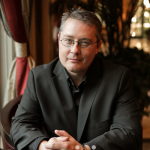 The 28-year Las Vegas veteran arrived in the valley as a member of the United States Air Force, but quickly transitioned into sports after fulfilling his military commitment, working in sales for the Las Vegas Thunder (IHL), Las Vegas Stars (PCL), and UNLV.
His local broadcasting career started in 1994 as a weekly sports radio personality on 840 KVEG. Since, Dana has been asked to lend his sports expertise on various radio, television, and newspaper platforms across the US and Canada.
Lane, married with three kids, will be entering his 5th season as the voice of the Skatin’ Rebels. 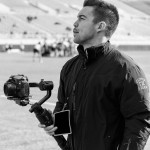 Dallas Kreil joins the UNLV Hockey staff as the Social Media Manager. He is a graduate of UNLV from the College of Urban Affairs and has been involved with creative media since 2014. Throughout college, Dallas worked for professional teams in the Las Vegas valley including; the Vegas Golden Knights, Las Vegas Raiders, and Las Vegas Aces providing video/creative content for social media. As Kreil enters his second season with the program, we can’t wait to see what ideas he has to elevate Rebel Hockey. 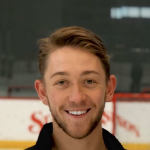 Zack Frongillo joined the UNLV Hockey program back in 2015 with the desire to just be involved. He started by Dj-ing and being the voice behind UNLV Hockey games. Frongillo manifested his position and completely changed the atmosphere at home games. He would eventually accept the role of Production and Entertainment Manager in the 2018-2019 season. Zack, while working with UNLV Hockey, also worked as a Stage Manager for the Vegas Golden Knights, and worked in the operations department of UNLV. In the 2019-2020 season, he was behind all player head shots, intro videos, music, PA announcing, and managed a team a small team of interns. Frongillo is excited to be back for the 2020-2021 season, and continue to push the envelope in entertainment for UNLV Hockey. 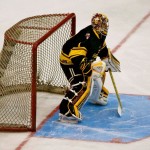 Joe D’Elia is entering his first season as a volunteer goalie coach after recently moving to Las Vegas. Joe is originally from Richmond Hill, Ontario, Canada where he grew up playing in the AAA ranks of the Greater Toronto Hockey League (GTHL). After playing in the GTHL, he played 3 years of Junior Hockey in the Ontario Junior Hockey League (OJHL) for the Villanova Knights, Streetsville Derbys and the St. Mike’s Buzzers.

Joe has a strong passion coaching and for growing the game of hockey. He is also the volunteer goalie coach for the VJG Knights U12AA team and a volunteer strength coach at Elevate Sports Performance & Healthcare as he is currently in the process of becoming a Certified Strength & Conditioning Coach. 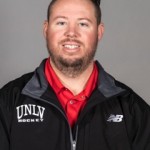 Born and raised in Las Vegas, Jared grew up playing hockey at a young age within the walls of roller and ice hockey rinks around the valley. After finishing high school right down the street at Faith Lutheran, Jared attended UNLV for the next seven years. In that time, he played and coached for the Rebel hockey team, received both a bachelor’s in Kinesiology and master’s degree in Biomechanics, and began his career as a strength and conditioning coach.

Jared has spent the last 10 years coaching youth hockey and as a strength and conditioning coach. Over the last five years, Jared has worked primarily as a strength coach with general population individuals and groups, as well as amateur, college, and professional hockey players. Jared spent a year as a Performance Conditioning Specialist with Cirque du Soleil’s Las Vegas resident shows, working with some of the most talented acrobats, dancers, and artists in the world.

This will be Jared’s first season with the UNLV Rebel Hockey program. ​

- Master of Science in Biomechanics, UNLV 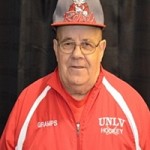 Frank ‘Gramps’ Perone Sr., for years was the unofficial GM at all UNLV Rebels ice hockey games. Gramps’ grandson, Anthony Vignieri-Greener, is one of the all-time goal scorers and current Head Coach of the UNLV Rebels. Unfortunately, Gramps passed away in May of 2019 but we want to continue to honor him as a member of our staff.

On game nights Gramps would be on the bench near the hockey sticks area where he kept players game-night hockey sticks in order. He was very popular with media and with opposing players as well – a very special, genuine person who loved the sport of hockey, loved talking about the game and loved being on the Rebels bench on game nights.

Gramps had been involved with numerous Las Vegas hockey teams over the years:

Coach Anthony Vignieri- Greener had this to say about “Gramps”,  “He was my hero. Growing up with him always being my second Dad and helping and leading my brothers and myself as kids.”