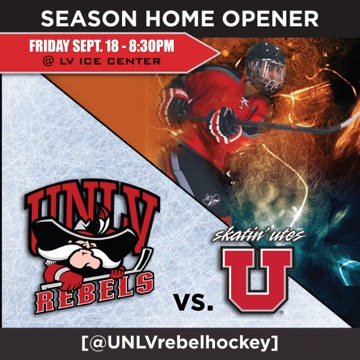 The Skatin’Rebels take on the University of Utah this weekend in their home opener series. Coming off of a 7-4 win in last Friday’s preseason game against the Las Vegas Storm, UNLV looks to kick off the season strong with victories against the Utes.

“Last weekend’s game was huge for us. Not only did we get to see where we were at skill-wise but we also got to bond over a hard-fought win straight out of the gate. Nothing brings the guys together like winning your first game of the season. I think if we translate that same effort along with the work we have put in this week, we will accomplish our goals this weekend,” said defenseman Tyler Wilson.

Finishing third in the west and sixth in the nation last season, the Utes are going to be tough competitors this weekend. Last season they hosted the national tournament and thus received an automatic bid, where they went 2-1 in the round robin and ultimately fell to the eventual runner-up team, Florida Gulf Coast.

“It was a good year, but obviously guys move on and it’s a different team now. It’s a blank slate, and we’re starting new,” said Brett Huras, Utah head coach.

Huras was named their head coach in April after he served as their assistant coach last season.

“I’m certainly expecting lots of energy from my guys. We’ve been on the ice for about a month practicing and preparing for the season and this weekend specifically. We have some new guys on our team and a good mix of core veterans from last year. We’re definitely expecting a battle from UNLV and it is exciting to start the season.” he said.

UNLV is on the same page in terms of having a new coach behind the bench this season, as Anthony Vignieri Greener takes the reigns. Greener is a former UNLV player and has an immense history with hockey in Las Vegas. Throughout his time playing for the Skatin’Rebels, Greener was named a first team All-American, as well as a second-team All-American. He was also a contributor to the at-home unbeaten streak that spanned two seasons and 36 games total, and helped them reach the regional tournament.

“With us being so young and having so many new faces in the room it will be a tough challenge but with the talent and work ethic of this team, I think we will be competing with them,” Greener said. “If the boys buy in to our plan, we will have a very promising season. Beating the Storm last Friday was a momentum builder and we hope to continue that this Friday night.”

Even with promising results on the ice, this season needs great fan support in order to be a success. “I would love to see new faces at the rink,” Greener said. “The hockey community is so small and very supportive of each other, but I would love to see new and old UNLV students start making our games along with any alumni.”

Wilson added, “We’re hoping to take this team to the next level in the years to come and we need as much support from the community as we can get in order to get there.”

The puck drops at 8:30 p.m. on Friday and Saturday night at Las Vegas Ice Center. Single game tickets are $10 for adults and $5 for children and students. Children in a jersey get in free with a paying adult. Come show your support and wear BLACK to BLACKOUT Utah in the Skatin’Rebels home opener!