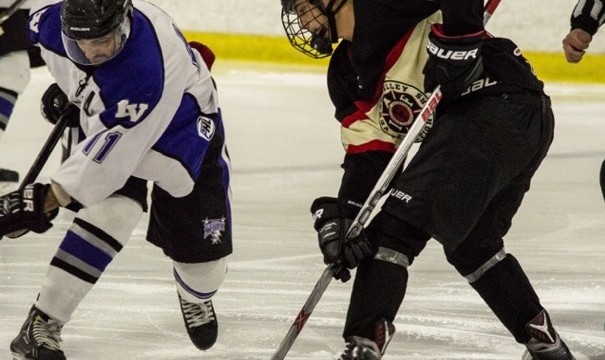 Your Skatin’Rebels notched the victory Friday night when they took on the Las Vegas Storm Junior A squad in their sole preseason game at Las Vegas Ice Center. In support of Las Vegas Fire and Rescue, donations were accepted at the door and the Rebels wore themed specialty jerseys.

The scoring kicked off a little less than halfway through the first period, as the Storm notched the first goal with 13:19 remaining in the period. About four minutes later, UNLV tied it at one goal apiece. Just a minute after that, the Storm appeared to have taken the lead back, but the goal was disallowed due to a high stick.

Not long after the puck dropped for the second period, the Storm scored a shorthanded goal and picked up a 2-1 lead. UNLV went on a 5-on-3 power play and bounced right back with another goal to tie it, but the Storm took the lead back less than a minute later. That was the last the Storm would see of a lead, as UNLV went on to score five in a row. After they tied it 3-3 with six minutes left in the second period, they quickly took the lead off of a shorthanded goal. Right after that, they notched another to extend their lead to two goals as the second period came to a close with the Skatin’Rebels leading 5-3.

The barrage of UNLV goals continued right as the third period began. On the power play two minutes in, the Rebels scored to make the game 6-3 in their favor. With 13 minutes remaining in the game, they added another goal to make it 7-3. The final goal was scored by the Storm with 8:15, and it capped off a dominant 7-4 win for UNLV.

Next weekend, the regular season begins in a home series against Utah. Puck drop is at 8:30 p.m. both Friday and Saturday night at Las Vegas Ice Center. Come out in black apparel and help us blackout the arena to show your support for the Skatin’Rebels as they kick off the season!