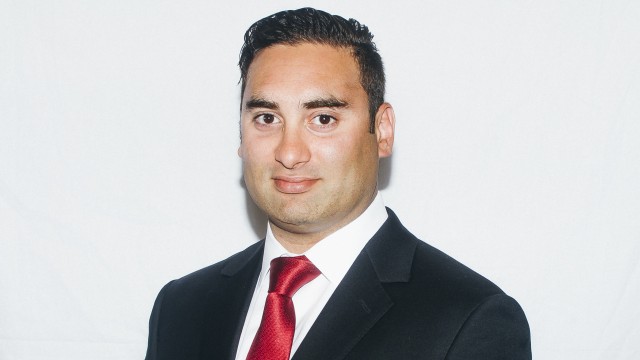 In attempt to revamp the UNLV Ice Hockey organization for the upcoming season and beyond, many changes have been made to the team, both on and off the ice. One of the most notable ones is the addition of team General Manager, Zee Khan.

Khan joins the team for the 2015-2016 season following an extensive past in hockey. After playing in school in Connecticut, he began his collegiate hockey career playing at UMass and later transferred to Arizona State University. He played there and graduated in 2006, and remained a part of the alumni board for the past three years.

“At Arizona State, it was our group of players that came in and started taking it seriously, hiring coaches and increasing visibility. Both of my younger brothers were part of a legacy there. My youngest brother was part of the group who won a national championship. That ended up creating a lot of buzz nationally and allowed them to make that jump to NCAA,”  Khan said.

The accomplishment of helping ASU make the jump to a D-1 program was a monumental one, and Khan looks to replicate that progress here at UNLV. The goal for the Skatin’ Rebels is to model the program after ASU, starting with success on the ice and extending into growing their visibility on a national level.

Community engagement was mentioned as one of the key plans for increasing publicity locally. Khan noted some charity partnerships that are already in the works for the upcoming season, along with the organization’s plans to partner with UNLV’s broadcasting and journalism departments. In addition, the potential addition of an NHL team to the Las Vegas sports scene would provide massive benefits.

“The NHL is huge for the city and hockey in general. Having a team like that on a large scale will create hockey fans and more opportunities for kids to play, leading to them hopefully moving up to play at UNLV,” he stated. “We have some opportunities out there, but the key to becoming more visible is on-ice success. It is hard to draw attention if we are not doing well.”

Compared to previous seasons, this year’s schedule is a bit tougher. They scheduled games against more highly ranked teams in order to increase their chances of qualifying for nationals. The Skatin’Rebels open the season on September 18 against Utah, the number two-ranked team coming into the season.

“It’ll be a good test to see how close or how far we are. We open the season at home against them and then we close our first semester against them, so we can gauge our progress.”

Other notable matches that Khan mentioned included the home series against UCONN, and the team’s Texas road trip for a tournament.

He added, “That will be a good series for the guys; they’re our first games of the second semester. I like that we’re going to be on the road for that after everyone comes back from their break.”

With a solid group of returning players taking on leadership roles and fresh faces being added to the roster, Khan mentions that it’ll be a great mix of personnel. There are good relationships between existing players and the coaches.

“As much as this is a transition season from the way we are looking at it, we are still expecting a dramatic increase in wins. We are expecting quite a bit from the players this year. The biggest thing we haven’t had here is a true plan. I want to put a plan in place to really help this team succeed.”