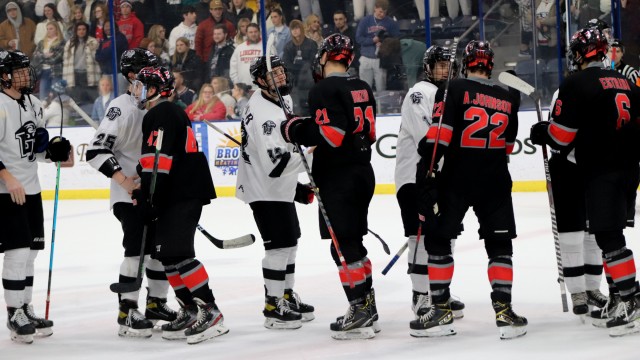 UNLV Hockey prepares for a rematch series against the Liberty Flames

This weekend UNLV hockey (13-2) travels to Lynchburg, VA to take on Liberty  (12-7) in hopes of avenging its only losses this season.

“There’s a certain aspect of, maybe wanting to get a little bit of revenge and I think our guys are gonna be up to the task for sure,” Assistant Coach Nick Robone said. “It’s a great environment. They’re a good team. We should have no problem getting up to these games.”

The Skatin’ Rebels face off against the Liberty Flames at LaHaye Ice Center on Jan. 20-21, with Friday night featuring a 4 p.m. PST puck drop and a Midnight Madness 9 p.m. PST on Saturday.

The Rebels enter the weekend looking to build their six-game winning streak, coming off a big series against Arizona. UNLV swept the Wildcats with a shutout on the first night.

“It’s really nice to get both those wins under our belts, and moving into Liberty it’s gonna be a whole nother ballgame,” forward Jaedin Ness said. “I think we can work on defensive plays, but we’re pretty much set.”

The two teams last faced off in November, where the Flames handed UNLV its only ACHA losses of the year, outscoring the Rebels 11-4 over the series.

Liberty will host the weekend after two upset losses against Ohio University, getting shutout (7-0) the first night.

“I think we’re a lot more prepared. We underestimated them last time… thought it was going to be an easier game than it was, but we know more of what to expect,” goaltender Landon Pavlisin said. “We’re a lot more motivated. We’re going to work on our systems this week to make sure we have those down to counter [Liberty's].”

Both games will be streamed through ESPN. Follow UNLV Hockey across all social media platforms to stay up to date with the team.