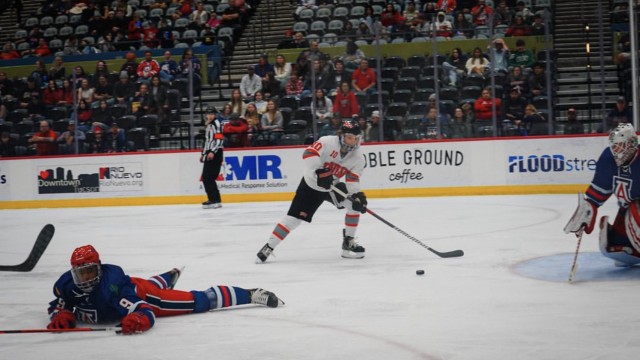 Tucson Arena witnessed UNLV hockey improve to a 13-2 record as it swept the Arizona Wildcats in a thrilling first series of 2023.

“The first night we just did a really good job defensively… riveted, put up a couple more goals,” assistant coach Nick Robone said. “Then the second night- we’re always gonna find ourselves in a tougher situation and probably faced some adversity and we did, fortunately, find a way to win.”

Goaltender Landon Pavlisin earned his first scarlet and gray career shutout in a 5-0 victory over the Wildcats Friday night.

By the end, Pavlisin prevented 33 shots from slipping past him into the net for a perfect game. Pavlisin now has a 5-1 record with a 0.928 save percentage.

“I had some bounces coming my way there was one where one of their guys tipped a shot wide that was going in,” Pavlisin said. “Some big blocks by our team too, they definitely helped me out, especially at the end with those penalty kills.”

“It felt amazing just to get that out of the way and finally, get a [shutout]… so it was a great night for me.”

The second period saw a single goal accredited to Robert McCollum, assisted by Mattias Dal Monte and Tinling. Wildcat Ryan Fischer added extra assurance to the goal tipping the puck past his goaltender.

With less than ten minutes to go in the third period, Cole Wyatt slipped the puck into the back of the net off a play from Max Johnson and Jayson DiMizio. To extend the lead to 5-0, Kyle Quinn made a pass to Gunnar Smith, who sent it in for a score.

The 5-0 triumph was the second shutout from the Rebels in the last four games of action for UNLV.

The Skatin’ Rebels completed their first sweep of 2023 against the Arizona Wildcats with a 4-2 win Saturday night.

UNLV took to the ice at Tucson Arena with a slower start than the previous night, not seeing the lead until the third period.

“We knew that Arizona was gonna come out swinging,” Robone said, “so we did a good job of weathering the storms early and the boys did a really good job defensively. That was kind of part of our preparation all week as you know, play hard, but we’re gonna defend harder.”

Scoring action in the first period did not appear until the final four minutes, with Jesse Lowell narrowly shooting one past Pavlisin for the Wildcats. The Rebels responded with Quinn sending the puck in for a tied score.

After an intermission, the Wildcats quickly regained the lead with a goal by Tyler Shetland. Trailing 2-1, the Rebels began to pick up the pace while making more defensive plays. Alec Johnson tied the game with a goal off a pass from Max Johnson to conclude the second period.

Right off the whistle in the third, UNLV’s offense initiated more shots on goal against Wildcat goaltender Bivolcic.

Seven minutes into the period, Jaedin Ness lit the net with a sharp-angle shot to give the Rebels the lead.

“I was in the right place at the right time and I just kind of threw it on net and hit off of [Bivolcic’s] pads… and the rest is history,” Ness said. “It’s just a really big goal for me- I felt awesome. I don’t think words can explain how I was feeling. It was my birthday weekend, so that added to the excitement.”

The Rebels kept the Wildcats at bay for the remainder of the game.

Bivolcic skated out of the net with a minute on the clock, attempting to clear the puck. Instead, the puck found its way to Golant’s stick, who then shot it off the crossbar into the net.

UNLV rallied together in the final 20 minutes to finish the game 4-2 despite being outshot in the first two periods.

The series counted as the first back-to-back games played with Pavlisin between the poles.

“I haven’t done that in a few years either, so it felt pretty good. I tried to conserve my energy a bit more when the puck wasn’t in my zone or even just tracking the puck around,” Pavlisin said. “I think I managed it pretty well and I felt good going into the second game to just feel more confident and more prepared definitely than the first game.”