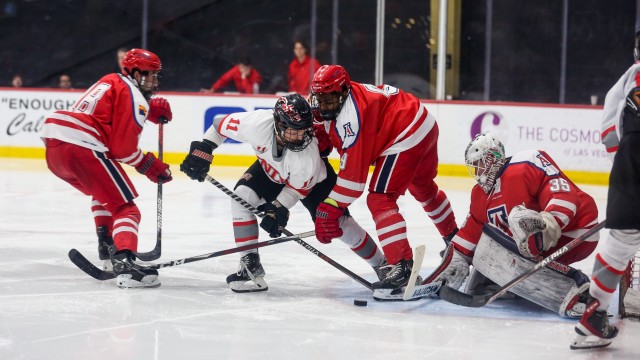 UNLV Hockey travels to Arizona to take on the Wildcats

UNLV hockey (11-2) returns from break as they prepare to hit the road to face University of Arizona (10-4-3) to start the spring semester.

Returning to City National Arena after the holiday break, the Rebels competed in a three day tournament of mini 3v3 games to shake off the rust and get back into a competitive atmosphere.

“We opened with a 3v3 tournament and it’s good to see the competition level,” head coach Anthony Vignieri-Greener said. “ We’re just going to take it one game at a time and not think too far ahead.”

The Skatin’ Rebels face off against the Arizona Wildcats at Tucson Arena on Jan. 13-14, both nights featuring a 7:30 p.m. MST puck drop.

The Rebels enter the weekend against Arizona coming off a dominating performance in the Vegas Showcase back in December, scoring 33 goals in only three games, and a four game winning streak.

The Wildcats will enter without a streak, splitting their last series in December against Arizona State with a shootout loss the second night.

During the first half of the season, UNLV racked up a total of 77 goals in 13 games, averaging 5.92 per game, while only permitting 30 goals against (2.3 per game).

“I’m going to enjoy [the road trip],” defenseman Alec Johnson said. “We haven’t been on the road much the first half of the season so it’s always nice going down to UofA and playing in that arena so I’m looking forward to it.”

Both games will be streamed live from the University of Arizona Hockey youtube channel.

Follow UNLV Hockey across all social media platforms to stay up to date with the team.