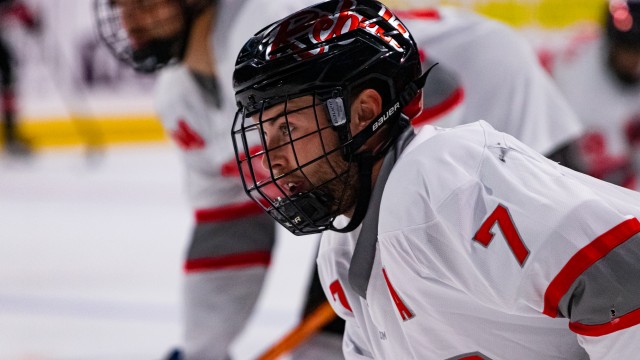 January 6, 2023
Nick Robone
Kayla Faasse
Skatin’ Rebel forward Paxton Malone prefers to keep his game day routine as simple as possible to keep a positive mindset heading into each game.
Malone’s morning starts around 9 a.m. when there’s no morning skate, depending on when his body will naturally wake up.
“The breakfast part usually depends. I’ll eat on the road trips with the boys. I know [Hunter Muzzillo] has a pretty intense game day routine, and mine is the opposite.”

“Breakfast- that’s not a part of my routine,” Malone said. “Not a big breakfast guy… I’ll have a granola bar or something, and that’ll hold me over until – I like to stay pretty hungry because I eat a big meal around 3 o’clock.”

Around noon, Malone will lie in his room to get his pre-game nap, which generally lasts two hours. After waking up at 2 p.m., he will chill inside his apartment for an hour before making chicken rice for his 3 p.m. meal.
After eating, he will work on any homework to stay on top of the academic workload. Then, two hours later, at 5 p.m. Malone is heading down to City National Arena to prepare for the upcoming game with roommates Muzzillo and Brendan Manning.
Muzzillo drives the trio on most game days, and they will stop for drinks. Malone will order a plain coffee with cream and sugar.
“Sometimes Manning and I drive separately, just because [Muzzillo] likes to take his time after the games,” Malone said. “Sometimes we want to get out of there immediately, so it depends. But no superstitions there.”
On the way to City National Arena, Manning and Malone are in charge of the music to avoid Muzzillo’s country playlists. Instead, typically they will listen to rock music like Nickelback and allthe old 2000s rock bands.
The trio will get to the rink two hours ahead of puck drop, typically at 7:30 p.m., so they will be walking in the doors at 5:30 p.m.
The first thing he does when he gets there is tape his sticks for the night before hanging out in the locker room for an hour. Then, if his teammates are interested, a group will go to the back ofthe rink and play keep-up with a soccer ball.
Malone gets to the gym 15 minutes before the team warm-up off the ice. So he’ll do his
stretches and get loose before the team joins him for a group warm-up.
With 30 minutes until go-time, the two teams will enter the rink for on-ice warm-ups.
“Every time we get on the ice, I’ll stretch by the red line,” Malone said. “Before I shoot any pucks
or even touch a puck, I’ll go up there and stretch for a couple of minutes. Then we’ll go into our passing drills.”
“If you’re watching the warm-ups, you’ll see the circle that I’m on passing the puck around- at a certain point; we’ll kick the puck to each other. It looks weird, but that is one thing I do every game.
With no superstitions, it doesn’t matter in what order Malone steps off the ice during warm-ups or in what order he steps back on for the starting line-up.
“I’m pretty simple. It could change day-to-day, but this is my typical routine,” Malone said. “But ifI’m not playing too well, I’ll try to change, maybe eat something different before the game. I’m open to doing anything different to play better if I’m in a bit of a rut.”
As a fifth-year on the scarlet and gray, Malone likes to keep his game day routine simple in hopes of not adding any pressure to himself before taking the ice with the Skatin’ Rebels.
Join Paxton Malone at City National Arena on Jan. 27-28 as the Rebels take on the Oklahoma
Sooners, with a 7:30 p.m. puck drop for both nights.
Follow UNLV Hockey on social media platforms to stay updated with the Skatin’ Rebels.
Tweet
UNLV Rebel Hockey