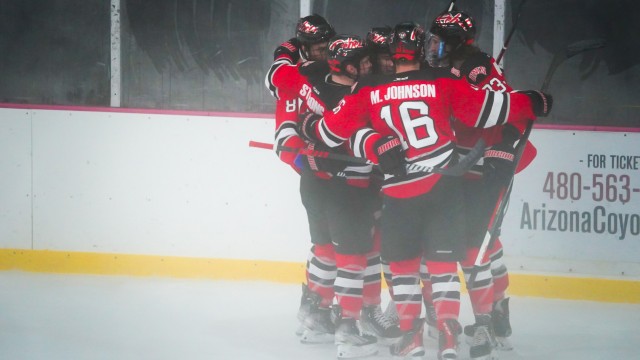 UNLV Hockey concludes its fall semester schedule hosting the Vegas Showcase, Dec. 8-10, with three schools traveling down to the valley to compete.

Out of the three schools, San Diego State and Oregon are both in their first year of ACHA Division I hockey, making the jump after repping winning percentages above 65% last season.

UNLV Hockey will also be facing off against the Canisius College Golden Griffins.

The Aztecs are entering the weekend with an overall record of 0-9, still looking for their first ACHA Division I victory.

Junior goaltender Parks Owensby has appeared in 8-of-9 games for the Aztecs, allowing 42 goals against on 250 shots faced for a 0.832 save percentage.

The Golden Griffins fly to Las Vegas with a 6-6 record, coming off a win against Mercyhurst University.

After a late November series against the College of New Jersey was postponed, Canisius has not competed in a game since November 13.

Throughout the Griffins 12 games, they have scored 59 goals (4.9 per game) and allowed 73 goals against (six per game).

Forward Kyle Neudorf sits on top of the Canisius leaderboard, tallying eight goals and 17 assists (25 points). Right behind Neudorf with 20 points, Brendan Reid has nine goals and 11 assists around his belt.

Rookie goaltender Mansoor Egbali has seen the ice for seven games, allowing 28 goals against off 191 shots (85.3%).

The Ducks head south this weekend with a 4-8 record, looking to build a win-streak after splitting a series with Utah this past weekend.

On offense, Ducks Jimmy Gagan and Barak Braslavski each have six points under their belts to lead Oregon. Gagan enters with three goals and three assists, while Braslavski has two goals and four assists.

Last year, UNLV faced off against Oregon in an exhibition series to conclude the regular season.

The Skatin’ Rebels look to kick off the Vegas Showcase this Thursday, Dec. 8, against the San Diego Aztecs with a 7:30 p.m. puck drop.

The game will feature a $2 beer night sponsored by Chicago Brewing and Mackenzie River.

Prior to the game, there will be a blood drive outside of City National Arena from 3-7 p.m. Anyone who donates blood will receive a free ticket to the game.

Saturday night (Dec. 10) is Helen Marie Smith School Night, featuring a 7:40 p.m. puck drop against the Oregon Ducks. The school will receive 25% back of total tickets it sells.

All weekend the Rebels are partnering with 98.5 KLUC Toy Drive. Anyone that brings a gift will receive 50% off the price of an adult ticket for entry.