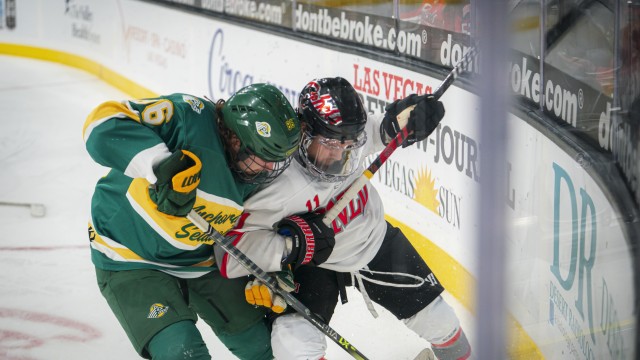 UNLV hockey faced off against NCAA Division I University of Alaska-Anchorage in an exhibition game Wednesday night, falling 3-1 to the Seawolves.

The Skatin’ Rebels saw a crowd of roughly 2,000 fans at the Dollar Loan Center as they hosted the first NCAA Division I hockey game in Las Vegas.

The game was the third against Alaska, but fourth overall NCAA game for the Rebels this year, as the program continues to strive to join the next level.

The Seawolves wasted no time getting on the scoreboard with Max Helgeson scoring on the first shot 19 seconds into the game.

“We weren’t too worried, there’s a lot of game left- there’s 59 minutes left in the game,” defenseman Alec Johnson said. “We just kept battling. They’re going to come, but you know we’ll get our bounces in. We seemed to get one in last minute.”

Despite letting in an early goal, Landon Pavlisin held Anchorage to a single point throughout the next 55 minutes.

The arena erupted with 4:47 left in the third period, as Alec Johnson made a one-timer from the high slot to tie the game at 1-1.

“It’s huge, obviously, special teams- you want to capitalize when you get a chance especially when you just had a 4-on-3,” head coach Anthony Vignieri-Greener said. “So, to go 1-on-3 on the power plays it’s one of our team goals. It’s even better for [Alec Johnson] to get his confidence going for this Liberty weekend.”

In a last minute comeback attempt, UNLV emptied the net with a minute on the clock. Anchorage took advantage, as Matt Allen made the third and final goal with 48 seconds remaining.

“[Pavlisin] came in when we were in Alaska- we didn’t give Wicks much help that game and he came in as relief and kind of shut them down,” Greener said. “He played a hell of a game up there, so it was only fitting for him to come in and play the way he did against them again.”