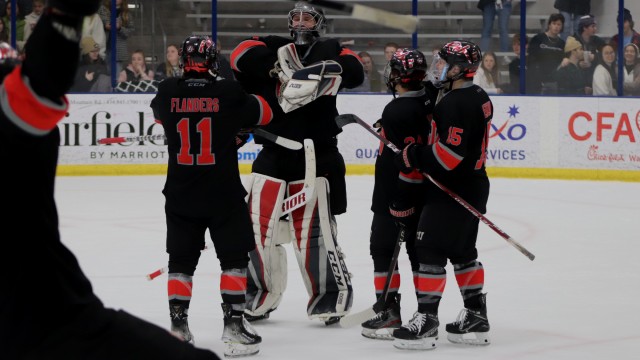 UNLV Hockey returns to Las Vegas with a 7-0 ACHA record to take on Alaska-Anchorage at the Dollar Loan Center, followed by a two-game series against Liberty.

“The guys are doing well and we have a lot of depth,” assistant coach Nick Robone said. “So we’re having this stretch of games for some really quality opponents should help prepare us down the road during the season.”

UNLV faced off against Anchorage twice earlier this year, falling 0-2 against the NCAA Division I school.

A mini success came during the second game, as forward Jayson DiMizio scored the first goal of the night. Goaltender Landon Pavlisin kept the Rebels close to a victory, as they dropped 2-1.

The Rebels faced off against the Liberty Flames four times during the 2021-22 season, walking away with a 3-1 record.

Overall, the Rebels scored 13 goals against the Flames, while Liberty made 11 goals throughout the four games.

“We seemed to develop a nice little rivalry with Liberty here throughout the course of last year,” Robone said. “So, for us to be able to host them at City National Arena, should be some great games for our fans to see.”

The Skatin’ Rebels host the Anchorage Seawolves on Wednesday (Nov. 16) at the Dollar Loan Center featuring a 7 p.m. puck drop.

Prior to the series against Liberty, the Flames will face off against Anchorage on Nov. 17 at the Dollar Loan Center.

“I think the day off between games is definitely something that should be able to help our guys rest up and be ready to go for a really tough series versus liberty on Friday and Saturday night,” Robone said.

Tickets for the Dollar Loan Center game can be purchased here.

Follow UNLV Hockey across all social media platforms for live updates throughout the games or stream it live on the UNLV Hockey Youtube channel.