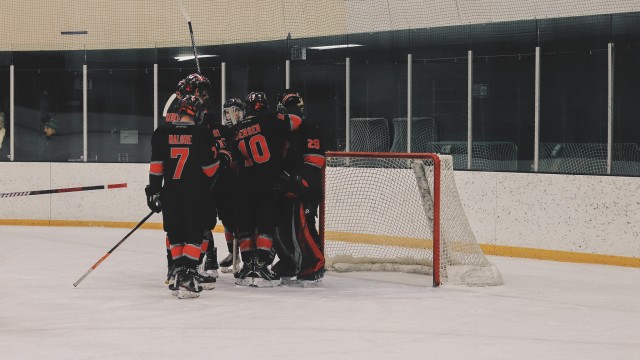 UNLV improves to 7-0 in ACHA, sweeping University of Colorado-Boulder

Rebel hockey improves to a 7-0 ACHA record, sweeping the Colorado Buffaloes on the road over the weekend.

“For whatever reason right now, we seem to be playing better on Saturday nights,” assistant coach Nick Robone said. “I think that it goes to show once we get a better feel for the team that we’re playing, and we’re more comfortable on our systems and what we’re doing- we seem to have better starts, and overall execution.”

After a slow start, the Skatin’ Rebels dominated the Buffaloes in a 7-3 victory to kick off the series.

Landon Pavlisin started between the poles for the Scarlet and Gray, making 28-of-31 saves for a save percentage of 90.32%.

Hunter Muzzillo opened the scoring 15 minutes into the game, assisted by Azzaro Tinling and Alec Johnson.

Colorado tied the game early in the second period, with a goal coming from Tommy Kleinman on a 5-3 power-play after Bradley Golant served two minutes for unsportsmanlike conduct by the Rebel bench and Luke Burke sat in the box for elbowing.

UNLV was quick to respond with Cole Wyatt scoring a goal to take the lead back, assisted by Riley Jensen, only thirty seconds after Colorado’s goal.

Jayson DiMizio then took a penalty for roughing, putting the Buffaloes on a power-play. Despite being a man-down, the Rebels battled for a goal by Golant with assists coming from Michael Boutoussov and Kyle Quinn.

Shortly after, Burke took another Rebel penalty for roughing, putting the Buffaloes on another power-play.

Once again, with the extra-man advantage, the Buffaloes scored a goal by Jadon Del Tufo.

Five seconds later, the Rebels won the face off and responded back with a goal by Caleb Strong, assisted by Azzaro Tinling.

It didn’t take long for the Buffaloes to score their third and final goal on their fifth power-play by Maximillian Pasiennik.

The period ended with Colorado’s Luke Gosnell serving two minutes for roughing, putting the Rebels on a power-play. At the last second, Tinling scored assisted by Alec Johnson and Nicolas Flanders.

“The first one was a nice pass from [DiMizio]- the puck got caught up at the blue line. He fed it to me and I buried it,” Jensen said. “In the second one, Wyatt was driving the net hard, and I just picked up his rebounds. So thanks to them, they created those opportunities.”

The Rebels saw 47 shots on goal, compared to the Buffaloes 31 shots.

The first star of the night was awarded to Jensen, while the second star went to Strong and Pavlisin took the third star.

Keeping up momentum from the first night, the Skatin’ Rebels defeated Colorado 3-1.

The Rebels kicked off the game on a high note with Grant Smith’s first goal in the Scarlet and Gray, assisted by Quinn and Paxton Malone.

“That was the first shift for the game, and sometimes it’s kind of tough to get scoring opportunities in your first shift since you don’t really know the flow,” Smith said. “I got lucky. I got out there… and we got the puck up the corner high and a good shot and I just tipped it in.”

“It felt amazing. It felt like I got 1000 pounds off my back. I kind of got the money off the back. It’s been a while since I scored a goal.”

The next goal came late in the second period after Buffalo Alex Hartman entered the penalty box for interference.

With an extra-man on the ice, Flanders scored with assists from C. Wyatt and Robert McCollum.

Two minutes later, A. Johnson tucked the puck behind the net to put the Rebels up 3-0, assisted by McCollum.

In the third period, Colorado got its lone goal by Luke Gosnell.

“Wickson had a great weekend for us overall, he was solid in that for 60 minutes,” Robone said. “Unfortunately, we weren’t able to get him the shutout that he deserved, but his poise, leadership, and experience really paid off this weekend.”