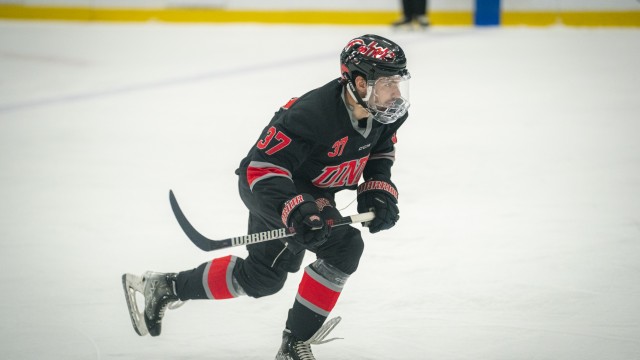 Skatin’ Rebels travel to Denver for series against CU Buffaloes

UNLV Hockey hits the road to travel to the University of Colorado for a two-game series as they look to stay undefeated.

“We’ve been doing a lot of battle drills, competing hard and getting ready for the weekend,” forward Bradley Golant said. “We should be pretty confident, but you know any team can beat anyone in this league and we just have to come out.”

UNLV is coming off another bye weekend, whereas Colorado will be coming off a four-game losing streak, being swept by Central Oklahoma and Missouri State.

“Any bye weekend is is nice,” defenseman Jake Berry said. “Right now… we had quite a few injuries, so it’s good for those guys to get some rest.”

UNLV’s top scorer for the season is forward Nick Flanders with four goals and three assists (seven points) in six games of action.

“I love the city of Denver. It’s just a beautiful place and Boulder is really cool,” Berry said. “I’m looking forward to getting two wins and then enjoying the city.”

Follow UNLV Hockey across all social media platforms for live updates throughout the game along with the streaming link prior to puck drop.