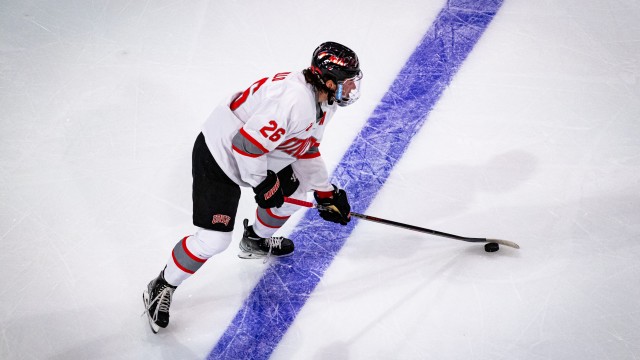 After three tours of duty with the Skatin’ Rebels, defenseman Hunter Muzzillo spends his fourth-year with UNLV hockey as the 2022-23 team captain.

“Being named captain is the greatest honor of my life thus far,” Muzzillo said. “I get a little bit emotional just thinking about it.”

The Rebels recruited the 6 foot, 185 pounder from Illinois in 2019, earning 20 points (seven goals and 13 assists) during the shortened season.

Muzzillo felt right at home with the scarlet and gray the instant he came to Las Vegas, and has never looked back.

“I was making my visits around the country to the various schools that I was fortunate enough to get offers from,” he said. “After I took my visit here, I knew this is where I belonged, and there has been nothing in my four years here that has ever made me question that.”

Muzzillo spent the 2021-22 season being an alternate captain to former Rebel Jared Erickson, learning the power in scarcity.

The duo spent a lot of time together throughout the season, and Muzzillo recalls the number one lesson he learned from Erickson being knowing there is a time and place to use your voice.

“I knew he was going to be a top contender for the role, and I’m excited to pass the helm down to him,” Erickson said. “Muzz has high expectations, same with the rest of the guys on the team, and I know he’s going to do great things.”

“My advice to Muzz is that your heart can’t lead you in the wrong direction. If you bring your heart into the locker room every single day, everyone’s going to feed off of that. A lot of people are going to want to be you and be apart of of your team. Enjoy every single day.”

Throughout the years, Muzzillo has formed a close relationship with the UNLV coaches. Assistant coach Nick Robone has taken pride in watching him develop not just as a player, but as a person off the ice as well.

“I think that’s been the biggest thing for me as a coach is seeing growth,” Robone said. “He has a bright future ahead of him whether it’s hockey related or he moves into the corporate world.”

Muzzillo appreciates every moment spent with the Rebels as he leads the team with pride and poise.

After falling out of Nationals last season in the final four, UNLV has high expectations for this new year. Every single player is pulling in the same direction on the ice to see the scarlet and gray bring home a National Championship.

“I know that every single guy in that locker room wants to be here and they bring it every single day… I don’t expect that to change,” Muzzillo said. “It’ll be the same as last year where you have a bunch of guys all driving towards the same place, and I don’t foresee there being any issues with that.”

As a veteran on the team, Muzzillo knows the importance of leading the charge as the Rebels take a 5-0 start this year, better than the 4-2 start last year.

With Muzzillo at the helm, UNLV looks towards another deep run at Nationals as the current No. 1 ranked team in the ACHA.

“I know that I’m a long shot from perfection, but I promised [the team] that I’ll get up every single day and do everything in my power to make sure that I’m gonna be the best teammate, leader, and friend for each and every one of them,” Muzzillo said. “It truly is the greatest honor of my life thus far and I cannot thank my teammates, the coaching staff, and the fan base in the city for trusting me with this.”

“My promise to the city and to the coaching staff is the same as it is to the boys. I will do everything in my power to be the best possible version of myself every single day.”

Join Hunter Muzzillo on his journey as team captain by following UNLV Hockey across all social media platforms to stay up to date with the Skatin’ Rebels.