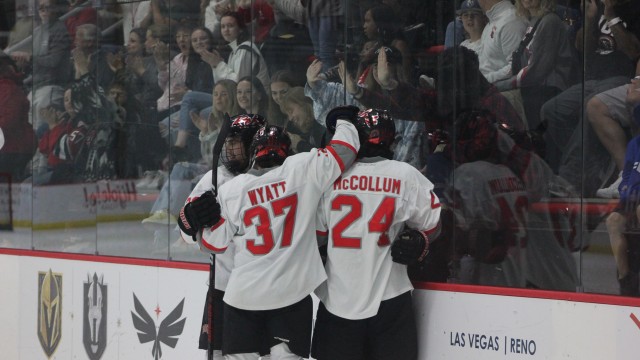 UNLV Hockey will be collaborating with Greek Life for its Midnight Madness matchup against
the Arizona State Sun Devils at City National Arena.

“I think [ASU] got much better after they brought in that new coach,” UNLV head coach Anthony Vignieri-Greener said. “He’s done a lot of good things… I don’t think it’s gonna be a cakewalk, like some people think it’s gonna be. They’re coming- they’re 6-0, so it’s definitely gonna be a tough task for us.”

Previous Match-ups
The Skatin’ Rebels faced off against the Sun Devils four times during the 2021-22 season, walking away with a perfect 3-1 record.

Overall, the Rebels scored 21 goals against the Utes, out of the 187 shots taken on net.

The Sun Devils earned 11 goals throughout the four games, only seeing 141 shots against goal.

“This is going to be- me, [Boutoussov] and Brad’s first weekend back together as one,” Flanders said. “I love playing with these guys. They just make the game that much easier. We’re looking at a fun weekend, that’s for sure.”

Last Season, ASU saw all three of its goaltenders take the ice against the Rebels.

Blake Bjella played to start the first matchup between the two, seeing 11-of-17 saves (64.7%). Dawson Rodin relieved him in the second and then continued to play the next two games against UNLV.

“It was good for recovery,” defenseman David Lenzin said. “You know, a lot of guys needed a bit of rest so we feel a lot more rejuvenated this week and ready to come hard at ASU.”

To kick off the new season, UNLV has seen 99 shots against the net during its three ACHA games (33 per game), compared to Utah’s 227 shots within six games (37.8 per game).

The Rebels have made 14 goals (4.7 per game), while only allowing six against them.

Transfer Landon Pavlisin saw his first victory in the scarlet and gray to close out the series against Utah, skating away with 22-of-24 saves (91.67%).

Fans are encouraged to wear their Halloween costumes for the game.

“I work over at LVIC coaching some kids and I know a lot of them are going to be there in the crowd,” Flanders said. “I’m looking forward to seeing all the guys around the rink and seeing a good fan base of young people- they’re always the loudest.”
Follow UNLV Hockey across all social media platforms for live updates throughout the game or
stream it live on the UNLV Hockey Youtube channel.