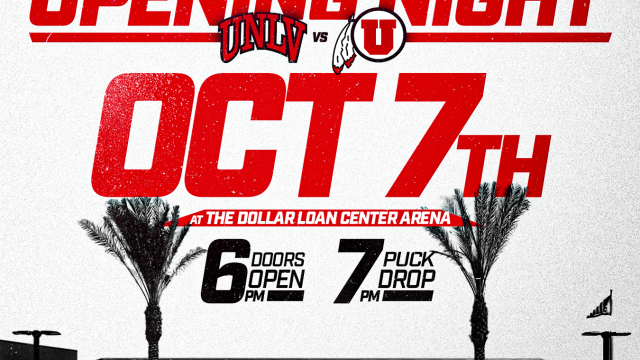 Rebels to Play Home Opener at The Dollar Loan Center

The Rebel Hockey program will play its first home series against the Utah Utes in Henderson, NV, kicking off the “Home Means Henderson” weekend in an exciting way for fans on October 7th and 8th.

The Rebels will face the Utes at the Dollar Loan Center Arena on Oct. 7th, with doors opening at 6 p.m. for a 7 p.m. puck drop.

The following night will feature the Scarlet & Gray in Henderson as they skate at Lifeguard Arena with a 8 p.m. puck drop.

Both nights will feature a 5 p.m. (Fri) and 6 p.m. (Sat) tailgate outside the arenas for fans to enjoy food, drinks, games, and prizes prior to the two teams facing off.

Tickets are on sale and can be purchased using the following link: CLICK HERE TO PURCHASE

The first 300 students to purchase tickets will receive free admission.

UNLV begins its 2022-23 season against Denver University, the reigning NCAA Division I national champions, in Denver on Oct. 1.

The Skatin’ Rebels, who are coming off a 27-5 season and ACHA Division I Final Four appearance, will host an intersquad scrimmage on Sept. 10 at 7 p.m. at City National Arena.