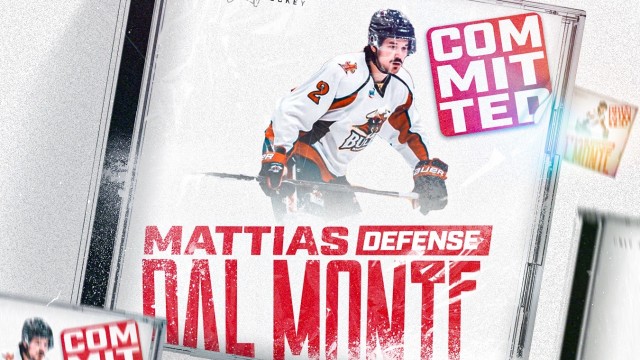 Defenseman Mattias Dal Monte is set to leave Utica College and join the Skatin’ Rebels for the 2022-23 season.

“Personally, I think I didn’t do enough research on where I was going and it kind of came back to bite me,” Dal Monte said. “But I did have a really good year, you know, academically and I met a lot of great friends.”

Dal Monte spent last season with the Utica College Pioneers, where he played in 14 games for one assist and one goal. Overall, the team went 17-0-1 and won their conference championship for the United College Hockey League.

“I made the decision to pursue a new opportunity, and Coach [Anthony Vignieri-]Greener reached out,” Dal Monte said. “I really liked our conversations on the phone and everything we talked about virtually.”

Coming into next season, Dal Monte hopes to bring a form of leadership to the team while being a guy on the team with a positive impact who gets along with everyone. He looks forward to the chance to improve his offensive game and become more threatening on the ice.

“Both Coach Greener and Coach [Nick] Robone- they’re passionate guys with a vision for the program that lines up with what I want to do for the next three years and my college career,” Dal Monte said. “It’s cool, it’s closer to home for me, my folks will get out to visit more. It was kind of a perfect blend.”

Prior to coming to the United States during the pandemic for hockey, Dal Monte grew up playing competitively in Canada to kick start his career.

During his last season in Canada, Dal Monte played for the Swan Valley Stampeders in the Manitoba Junior Hockey League. He played in 39 games, recording 12 goals and 30 assists (42 points).

In 2020-21, he played in 36 games for the Amarillo Bulls for the Northern American Hockey League, tallying three goals and four assists.

When Dal Monte was 17 years old, he attended a hockey camp with Rebel Jake Berry where the two became friends.

“[Dal Monte] is super skilled for how big he is and can handle the puck really well,” Berry said. “I’m looking forward to getting back on the ice with him.”

Dal Monte is from the Vancouver area, so naturally he is a Canucks fan. However, his favorite player and friend in the NHL is Dylan Coghlan so he cheers for the Golden Knights as well.

His favorite hockey movie is Miracle.

For pre-game, Dal Monte likes to keep it loose and listen to classic rock like Nickelback and Creed in the locker room.

He is missing a front tooth.

Dal Monte is a big movie buff with some of his favorite movie directors being Wes Anderson, Denis Villeneuve, and David Fincher. He likes to watch all the classics.

“I think a lot of the classic Scorsese Caucho movies people should watch. Everyone should have seen the first two Godfathers, Goodfellas, Casino… I think Sicario is really good. Everyone should see Fantastic Mr. Fox. That’s all I got,” Dal Monte said.

“I honestly just usually get called by my last name. I don’t really know if I’ve had one that’s really stuck. You kind of get different ones everywhere you go, but mostly just my last name. Just Monte or the whole thing.”

Follow along with the UNLV Hockey program to see Mattias Dal Monte start his career in the scarlet and gray in the fall. Be sure to follow your Skatin’ Rebels across all social media platforms to stay up to date with the team.