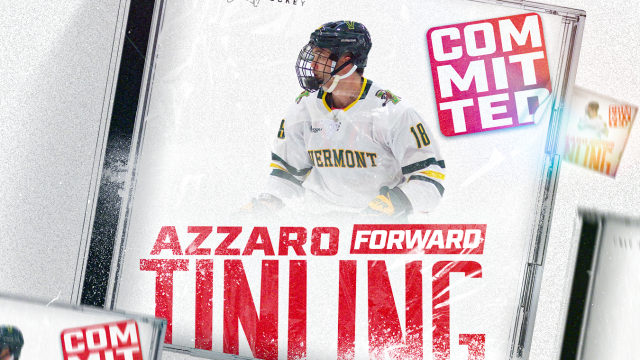 The Skatin’ Rebels have added 22-year-old right wing Azzaro Tinling to their 2022-23 roster.

As a Canadian native, Tinling entered the United States amid the COVID-19 pandemic to begin his college hockey career at the University of Vermont in the fall of 2020. He was lucky enough to face the new chapter of his life with his younger brother, Dovar.

The two brothers spent two years at The University of Vermont together, where Tinling was only able to play in 11 games due to a torn labrum his first season with the Catamounts.

After fully recovering, he was back on the ice passing the puck with his brother for the 2021-22 season with the Catamounts.

Prior to his college career, Tingling played for Hawkesbury in the Central Canadian Hockey League (CCHL). He spent two seasons with the Hawks while being alternate captain for his second year.

In total, Tinling competed in 90 games for 26 goals and 37 assists (63 points). During the 2018-19 season, he played in five playoff games for the Hawks and contributed one assist.

Tinling has spent the last four years playing hockey with his younger brother, marking his first season with the Rebels as the first one without Dovar in years.

After the two seasons at Vermont, Tinling was anticipating a change of pace.

“I was [at Vermont] for two years. My first year I redshirted because I needed to get surgery on my shoulder,” Tinling said. “Then the second year just wasn’t what I was hoping for. I felt like I needed to start a new path.”

The story of the rising Rebel Hockey program peeked Tinling interest when he began reaching out to prospective schools to transfer to.

“I’ve heard nothing but good things about the program,” Tinling said. “The players get treated- and everything with the team is like a D1 program including the way they train and travel. It’s pretty much the same thing if not better, experience wise.”

When it came to choosing UNLV, Tinling recalls it being a spur of the moment decision and he only focused on all the positives that came with becoming a Rebel.

Tinling is looking forward to the experience of wearing the scarlet and gray while creating more friendships and connections on the team.

“I thought this could be a cool experience to kind of find the love for the sport again and just enjoy playing hockey like I used to when I was a kid,” Tinling said. “Obviously, Vegas is a nice spot, but the hockey side seemed like it would be a good experience too.”

Tinling’s favorite NHL team is the Washington Capitals with his favorite player being Alex Ovechkin.

His favorite hockey memory is from his major midget year.

“We won our provincials which is like a big deal in Canada and in our province, and then we went to Nationals unfortunately lost. We got bronze but that was a crazy experience,” Tinling said. “I’ll probably remember that for the rest of my life.”

Before every game, Tinling will eat chicken rice and avocado while watching his favorite hockey movie, Miracle.

At the rink, he will dress while putting on the left side of his equipment first, and once he’s fully dressed, he’ll re-tie his left skate.

Tinling played against graduated Rebel Angelos Tsalafos in the CCHL.

He has a five-month-old French Bulldog, who’s moving to Las Vegas with him.

“Hopefully he can spend some time around the rink, around the guys and make some new friends. I’m looking forward to it.”

He is majoring in business administration entrepreneurship.

“Z is the one that stuck. I obviously have two z’s in my name, so it really started when I went to the University of Vermont. Everyone just calls me Z or Big Z.”

Follow along with the UNLV Hockey program to see Azzaro Tinling start his career in the scarlet and gray in the fall. Be sure to follow your Skatin’ Rebels across all social media platforms to stay up to date with the team.