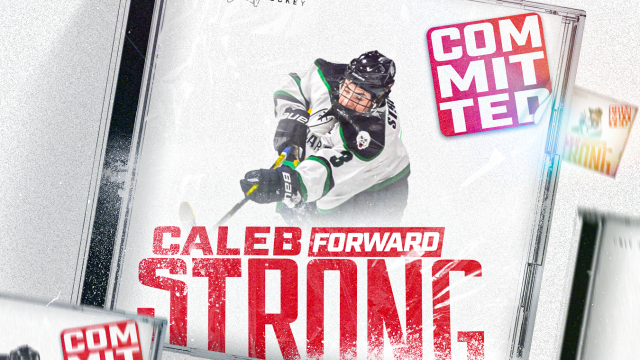 Coming off a season with the Las Vegas Thunderbirds, Caleb Strong is joining the roster for the Rebel Hockey program as a center.

The Thunderbirds concluded their 2021-22 season with a 29-14 record, with Strong participating in 42 games while being team captain. Throughout those games, he scored 38 goals and 52 assists.

With Strong’s high offensive skills on the ice, he finished eighth overall in the league for most points (90) and second on the team for points. The team tallied 213 goals during the season, and Strong contributed to 42.25% of them.

Strong helped to lead the team to a second place finish in the Pacific division.

In April of 2021, Strong was announced as a part of the USPHL Premier Pacific Division All-Stars, voted upon by coaches and league media staff.

“I didn’t know what I was going to do after or before this year,” Strong said. “Then I talked with the T-Birds’ coaches and they got me in contact with the Rebel coaches.”

From there, Greener and Robone went out to a couple of games and became interested in seeing Strong in the Scarlet & Gray.

“All of the coaches involved- for the Rebels and the T-Birds, especially the T-Birds coaches- they put a lot of respect into the UNLV program,” Strong said. “There’s a lot of respect for where it started and where it’s going. That really caught my eye of what’s happening and ultimately made me decide to go to UNLV.”

Strong is a Minnesota Native, who grew up following in the footsteps of his father, Mark Strong who played college hockey. He was only three years old when he put on his first pair of skates, playing hockey the following year.

Coming to UNLV, Strong looks at being an additional upbeat player on the team who can get the puck in the back of the net when needed. He looks forward to joining the fast-paced environment of Rebel Hockey and is anticipating improving that aspect of his offensive game.

Strong’s favorite NHL team is the Minnesota Wild and his favorite player is Cale Makar from the Colorado Avalanche.

One of his favorite hockey memories is placing second at the Minnesota High School State Tournament during his sophomore year in 2018.

Although Strong doesn’t have any pre-game rituals, he’s a big country guy and will typically listen to Morgan Wallen or Kenny Chesney in the locker room before a game.

“I guess my nickname is Phil- they called me Phil. I don’t know where it came from, but they call me Phil.”

Follow along with the UNLV Hockey program to see Caleb Strong start his career in the scarlet and gray in the fall. Be sure to follow your Skatin’ Rebels across all social media platforms to stay up to date with the team.