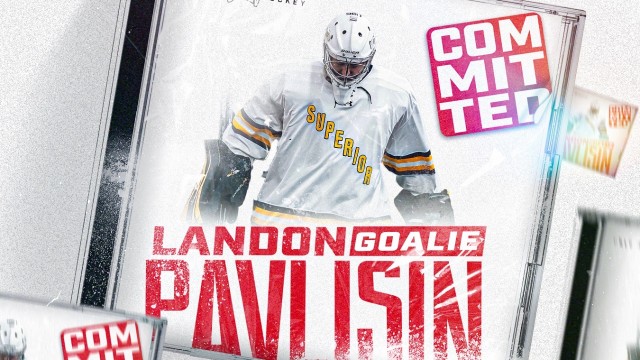 University of Wisconsin-Superior transfer Landon Pavlisin anticipates joining the Skatin’ Rebels as a third goalie on the 2022-23 roster.

The goalie will be transferring from the NCAA Division III school in hopes of bringing additional goaltending from the backend to help the Rebels steal games when needed.

“[UWS] is a smaller school. It wasn’t my favorite location to play in, but the hockey was really good with a high skill level,” Pavlisin said. “I’ve met a lot of good guys, so it’s a bit of mixed feelings about the whole thing. It was a good experience meeting all the guys and making life-long friends.”

Pavlisin is determined to improve his ability to control the play with his puck handling while being in the scarlet and gray.

Prior to playing at the college level, Pavlisin was born and raised in California. With very few ice rinks around, he started playing roller hockey with his brother before taking the step up to ice hockey.

Growing up, he would attend the Anaheim Ducks’ games, which he accredits his love of the game to.

During his 18 AAA season with the Anaheim Jr. Ducks Pavlisin played with current UNLV forward Michael Boutoussov. The two would play in 20 games together as Jr. Ducks with Pavlisin having a .881 save percentage.

The two moved on to play junior hockey in Canada after the singular season together. This time Boutoussov was scoring against his friend in net.

“We became closer honestly after heading more into juniors. We played against each other in Alberta,” Boutoussov said. “After the game we always met up and talked, caught up a little bit, talked about the season… I taught him how to fish and now he’s a natural.”

Pavlisin recalled playing against Boutoussov in Canada was a fun experience because he was rooting for his friend at the same time as trying to stop him from scoring any goals.

After not playing together for a few years, Pavlisin reached out to Boutoussov to see if the UNLV coaches would be interested in him joining the team.

“Throughout last year, I was following UNLV Hockey on all of their socials,” Pavlisin said. “I was keeping tabs on Mikey [Boutoussov], and I just saw how it looked like a lot of fun. I saw the team was doing pretty good, so at the end of the year when I decided I didn’t want to stay at my current school- I reached out to Mikey.”

“I just asked if he’d talk to the coaches and see if there was any interest. Lucky for me, they were interested and reached out. I went down for a skate a couple of weeks ago and fell in love.”

Boutoussov and Pavlisin have not played on the same team together since 2017, and have not played against each other in four years- marking this upcoming season as a mini reunion for the two friends.

“He’s a great guy. I’m excited to play with him again,” Boutoussov said. “I’m actually going to live with him next season, and I’m excited to finally play college hockey with someone from Cali.”

Pavlisin is looking forward to the warm weather, along with the location of the school having so many different activities to do with friends. With a beautiful city to play hockey in, he couldn’t ask for much more.

“Having access to go home whenever I want to,” Pavlisin said, “and having family be able to come out to watch my games is a huge plus to playing in Las Vegas. I’ve been away from home for the past five years or so- it’ll be cool to be able to see them a lot more often now.”

“My favorite hockey memory I would have to say is when I played in Ontario, and we won the championship for our league in 2018,” Pavlisin said. “It was just really memorable because we had a really good group, and we were in a town where there was nothing to do. So, we were a really close team and we were all underdogs coming in.”

“We all got traded there and turned our careers around individually and as a team to win the championship. It’s a really good underdog story for all of us.”

His pre-game ritual consists of using a foam roller that vibrates to get his legs going, and listening to EDM in the locker room.

“This year the guys on the team called me Lambo like Lamborghini. In the past, it’s usually just the typical- my last name is Pavlisin, so they’ll just call me Pavs or Pav.”

Follow along with the UNLV Hockey program to see Landon Pavlisin start his career in the scarlet and gray in the fall. Be sure to follow your Skatin’ Rebels across all social media platforms to stay up to date with the team.