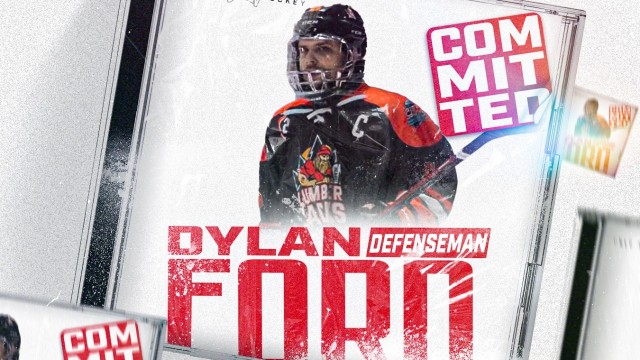 Dylan Ford is escaping the cold weather in Canada to travel down to Las Vegas to join the Skatin’ Rebels as a defenseman for their 2022-23 season.

The season will count as Ford’s first time playing hockey in the United States.

“I’m just really excited to meet everyone and see how different things are in the US,” Ford said. “Obviously, it’s still hockey, but I’ve heard so much about the college experience and college hockey so I’m really looking forward to that.”

Ford grew up in a house that constantly had hockey streaming on the TV. This lead to him beginning his hockey career at five years old. He quickly fell in love with the sport and the life-long relationships it would bring him.

About 16 years later and Ford is leaving his home country to play hockey in the desert for the Scarlet and Gray.

After reaching out to multiple schools and sending out a highlight tape to all of the coaches, Rebel Head Coach Anthony Vignieri-Greener reached out to Ford with interest.

It didn’t take long for Ford to fall in love with UNLV and make the decision to come out to Vegas.

“It seems like everyone there loves the program and hockey,” Ford said. “It’s pretty new scenes and I mean- the weather looks great. Everyone’s involved with the team so it’s really easy to see how much fun everyone has out there.”

Ford is attending UNLV coming off two years with the Hearst Lumberjacks in the Northern Ontario Junior Hockey League (NOJHL). His first season with the Lumberjacks, he recorded one goal and three assists in 12 games played.

Ford returned this past season as team captain, recording 10 goals and 28 assists for 38 points in 30 games. He helped to lead the team to the NOJHL Championship series against the Soo Thunderbirds.

The Lumberjacks managed to make it to Game 7 of the series, but lost in overtime 4-3. During the postseason, Ford tallied two goals and seven assists for a total of nine points.

As Ford anticipates making his debut as a Rebel, he looks towards making an impact with UNLV Hockey in the fall.

“I want to make sure that when I’m in the lineup I’m contributing to the team,” Ford said. “I’m a mobile puck moving defenseman. I like to play physical, so maybe be able to give the guys some energy from that.”

The Rebel’s blue line boasts talent and experience at all levels. Ford hopes that getting the opportunity to play alongside this group will help him mature and improve his game on the ice.

Ford’s favorite NHL team is the Vancouver Canucks, and he thinks the Colorado Avalanche will be the 2022 Stanley Cup Champions.

“I don’t have a favorite player, but I mean if I were to choose one it would probably be Cale Makar. He’s just insanely good. It’s crazy to see.”

Ford has a long list of pre-game rituals with all of his superstitions. He’s recently been listening to more rock and roll to get hyped before games.

“My mom always bugs me about the music that I listen to,” Ford said, “so I’m like ‘okay what’s some music that you like’ and she lists off Def Leppard, ACDC, and all that kind of stuff.”

He played high level lacrosse until last year when he made the decision to fully commit to hockey.

“Yeah, well, my last name is Ford. So everyone here just calls me Fordo. That’s kind of my hockey nickname.”

Follow along with the UNLV Hockey program to see Dylan Ford start his career in the scarlet and gray in the fall. Be sure to follow your Skatin’ Rebels across all social media platforms to stay up to date with the team