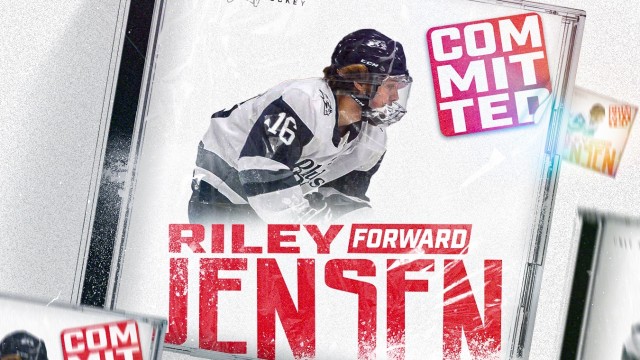 As UNLV Hockey continues to add to its 2022-23 roster, forward Riley Jensen joins the lists of recruits as he transfers from the Univeristy of Wisconsin-Stout.

“My grandpa built the rink (Edwards Ice Arena),” Jensen said, “and it has always been in our blood ever since.”

In Jensen’s 15 years of playing hockey, he attended Beloit Memorial High School. While there, he played against Skatin’ Rebel Jake Berry, who attended Waukesha High School at the time.

After spending years competing against Berry, Jensen is looking forward to having the opportunity to play on the same team as his rival.

“Playing against [Jensen] in high school, he was obviously smaller,” Berry said. “But you could tell even back then he had a good skill set and a great mind for the game.”

In 2018-19, Jensen played with the Soo Eagles in the Northern Ontario Junior Hockey League (NOJHL) along with fellow Skatin’ Rebel Kyle Quinn. He recorded 15 goals and 25 assists for a total of 40 points in 55 games played that season.

He went on to get recruited by Wisconsin-Stout where he competed in a total of 35 games for the Blue Devils in his three years there.

After reaching out to the UNLV hockey coaches and coming out to Vegas to skate with the Rebels, Jensen knew that hockey in the desert was the next step in his college career.

“I saw all the opportunity. There’s a lot around that can happen,” Jensen said. “I mean even post-college there’s a lot to do… Everyone welcomed me from the team, and I really liked that aspect of it.”

As Jensen looks to join the Rebels in the fall, he’s hoping to bring good energy and hard work with him. He looks forward to the opportunity to compete for a National Championship in the scarlet and gray.

His go-to song to get hyped up before a game is Untouchable by Youngboy.

“I’m super outgoing, pretty easy to talk to. So [the fans] can come approach me and ask me any questions,” Jensen said.

“They call me Jenny.”

Follow along with the UNLV Hockey program to see Riley Jensen start his career in the scarlet and gray in the fall. Be sure to follow your Skatin’ Rebels across all social media platforms to stay up to date with the team.