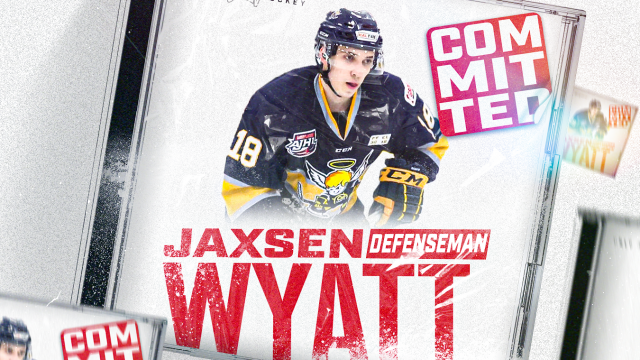 Rebel Hockey adds another defenseman to its roster with Jaxsen Wyatt, who will be joining his older brother, Cole Wyatt on the team.

“Not everyone gets a chance,” Jaxsen said. “Cole and I have played together for a few years and it’s awesome playing with your brother. We’re obviously not the same position, but I’m sure we’ll be on the ice a lot.”

“I never really get to see him anymore when he’s out in Vegas, and I’m here in Canada or wherever I am. It’ll be good to just to be together more. We might get on each other’s nerves like usual but it’s gonna be awesome.”

The two brothers, who are less than two years apart, grew up playing hockey in Alberta, CAN together and each fell in love with the sport.

“I’m super excited to play with my brother again, it’s been about five years now,” Cole said. “He is going to be a fantastic addition to our roster.”

With his brother on the team, Jaxsen has stayed in contact with the UNLV coaches all year with the hopes of one day being a Rebel. He finally made the decision that this was where he wanted to play college hockey, and having his brother play here as well was just a bonus.

Jaxsen looks forward to the warm weather of Las Vegas, while also having the opportunity to touch up his defensive game and decision-making on the offensive side.

Prior to choosing UNLV, Jaxsen spent his last season in Canada playing for the Calgary Canucks in 2020-21.

Last year, Jaxsen spent a season with the South Shore Kings in the National Collegiate Developement Conference, playing in 23 games with six assists.

He also spent a season with the Philadelphia Hockey club, racking up two goals and seven assists (nine points) throughout his 17 games with the team.

Jaxsen’s NHL team is the Edmonton Oilers, and his favorite player is Connor McDavid.

“I’d have to go with Connor McDavid, just for what he’s done for us as a defenseman,” Jaxsen said. “There are a lot of guys I look up to like Drew Doughty, and I like some of the smaller defenseman like Cale Makar- he’s a younger guy, but I try to look up to him a lot.”

Before games, Jaxsen will tie his left skate first, then right. His favorite artist to listen to before a game is Eminem and a lot of old rap.

His favorite movies growing up will always be the Lord of Rings franchise, but he also loves the movie Interstellar.

“A fun fact about me? No, maybe I’m not very fun,” Jaxsen said. “I’m sure the fans will learn a lot along the way, but for now I can kind of play the guitar- not very well but it’s something.”

“Most guys just call me Jax. A lot of guys call me Wyatt, but now that there’s two that’s probably going to be an issue,” Jaxsen said. “I don’t know what they call Cole, so I think we’re gonna have to go from there.”

Follow along with the UNLV Hockey program to see Jaxsen Wyatt start his career in the scarlet and gray in the fall. Be sure to follow your Skatin’ Rebels across all social media platforms to stay up to date with the team.