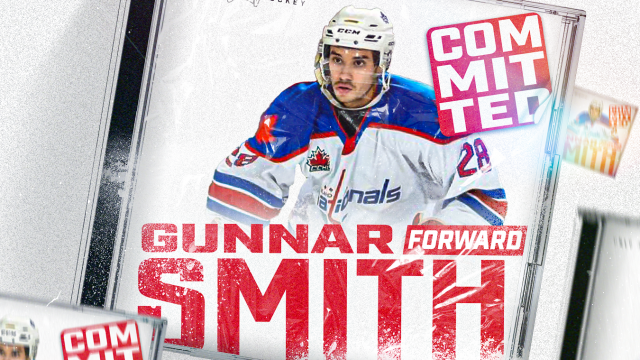 The Skatin’ Rebels added another center to the roster for the upcoming 2022-23 season, bringing in Skidmore College transfer Gunnar Smith.

“I hope to bring good energy, high tempo, and good pace. I’m looking to have fun,” Smith said about coming to UNLV. “I can’t wait to get back at it and fall in love with the game all over again.”

“The past couple of years have been kind of tough, so I’m just looking to step in and make any contribution that I can.”

Prior to college, Smith spent two years playing junior hockey in Canada. In that time, he racked up 23 goals and 57 assists for a total of 80 points with the Rockland Nationals throughout two seasons. He also added three goals and seven assists during the postseason in 2019.

Smith also spent one season with the Kanata Lasers during the 2018-19 season, recording 2 goals and 14 assists in 42 games.

Smith recalled playing at the NCAA Division III level was not the experience he was hoping for when attending Skidmore.

The COVID-19 pandemic cut playing time for the team and he is looking forward to stepping onto the ice as a Rebel this fall.

“When I decided I wanted to transfer, I was looking at a bunch of schools and UNLV has a good team,” Smith said. “I reached out to the coach. He was really interested so then I came out to skate for one of the practices before they went to Nationals… I knew this was a perfect fit. I loved it and I was like ‘yes this is where I want to be.’”

Smith hopes to work on his shooting skills while in the scarlet and gray with the goal of helping UNLV to another National Tournament.

Growing up playing hockey, Smith has only had the opportunity to play out east and is excited for the chance to play hockey in the west.

“I love moving around and seeing a bunch of places and I’m really excited to see what it’s like out there.”

Smith used to play football and baseball with his father playing college football.

Growing up, he watched football and basketball extensively and is a fan of the Carolina Panthers and Brooklyn Nets.

He never rooted for a particular NHL team, but he looks towards cheering on the Vegas Golden Knights during his time here.

Smith prefers to listen to hip-hop or rap to get hyped up for a game.

He is a huge movie buff with one of his favorites being the 1990 film Goodfellas.

“I am a big film buff guy,” Smith said. “I’m not talking about the newer ones, like I’ve gone back and watched all the classics.”

“My last name is Smith, so I’ve obviously gotten Smitty. I’ve got ‘Guns’ and sometimes G, but nothing too crazy,” Smith said.

Follow along with the UNLV Hockey program to see Gunnar Smith start his career in the scarlet and gray in the fall. Be sure to follow your Skatin’ Rebels across all social media platforms to stay up to date with the team.