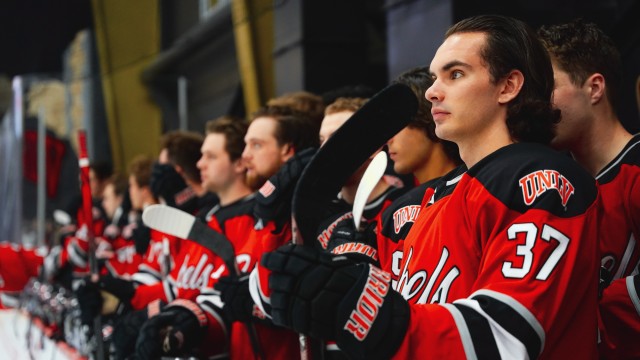 The UNLV Skatin’ Rebels’ season came to an untimely end in the American Collegiate Hockey Association’s National Tournament, after bowing out to the Central Oklahoma Bronchos in the semi-finals.

Even though the season ended before the ultimate goal, the team’s success cannot be understated.  Despite a lengthy absence from competitive play, head coach Anthony Vignieri-Greener was able to assemble an incredibly talented roster that boasted scoring on all four lines, depth, and excellent defensive structure.

This was by far the best season in the Rebel’s history.  UNLV finished the regular season ranked fourth in the nation with a 26-4-0-1 record after being off for almost two full years.

The team came into the first game of the season with high expectations, despite the layoff, and won their first four games convincingly.

After losing three straight games following, the team rattled off 16 wins in a row.  This included wins over perennial ACHA power houses such as Minot State, University of Adrian, and Liberty University.  The team also won the Chicago Classic Tournament in November during that stretch.

The win streak came to an end in Liberty, but that was the team’s last regulation loss of the regular season.  The team won six of their last seven games to end the season, with the only loss coming in a shootout.

UNLV won their first two games of the tournament against Pittsburgh and Liberty University by a combined score of 9-4 to advance to the National Semi-Finals for the first time in program history.

Despite a valiant effort from the Rebels, the semi-finals were as far as they would go.  The season came to an end on a late power play goal by UCO to eliminate the Rebels from the tournament.

Alec Johnson and Max Johnson made major impacts on the team this season.  M. Johnson led the team in scoring this season, finishing with 20 goals and 13 assists in 28 games played.  It seemed like every time the team needed a big goal, M. Johnson was there to provide it.

A. Johnson led all defensemen in scoring this season with 29 points (nine goals, 20 assists) in 30 games played.  He played major minutes on the top power play unit, using his lethal shot from the left face-off circle to score, and set up other scoring chances.

Cole Wyatt led the team in assists with 25 and had 31 points in 30 games played. Wyatt played on virtually every line during the season, and displayed a level of vision and playmaking that was second to none on the team.

The goaltending played perhaps the biggest roles in the Rebel’s success this season.  Coach Vignieri-Greener often referred to their goaltender situation as “more of a 1a and 1b than a one and two situation.”

Zach Wickson, the team’s “1a” goaltender, finished the season with a 17-2-0-1 record. He finished with a 2.03 goals against average and a .930 save percentage.  His goals against average was the best in the ACHA and his save percentage was tied for second (among qualified goaltenders).  Wickson played in every major game for the team, including all three in the National Tournament.  Wickson was arguably the best goaltender in the ACHA this season, and is a major reason the team was able to ascend to the heights they did.

Not to be overlooked, was the play of the number “1b” goaltender Vince Benedetto. Benedetto finished the season with a 3.18 goals against average and a .897 save percentage.  While the numbers do not jump off the page like Wickson’s do, his win percentage does.  Benedetto appeared in 11 games this season and won nine of them, including seven in a row.  He provided Vignieri-Greener with another excellent option who could step in anytime Wickson was unable to go, or to throw a different look at another team.

With the offseason now here, the team will look to retool their lineup for the fall season.  Senior stalwarts Angelos Tsalafos, Sean Plonski, and captain Jared Erickson will be graduating in May and will leave behind a legacy that will not be forgotten.

While that leadership and legacy will be missed for sure, the talent on the team will still be just as good, if not better.  The Rebels will be returning a majority of their current core, including both Max and Alec Johnson, Jayson Dimizio, Ezekiel Estrada, Hunter Muzzillo, Paxton Malone, and others.

The Rebels also have some high-profile recruits coming in next season, including Las Vegas Thunderbirds captain Caleb Strong.  Strong appeared in just 42 games for the Thunderbirds, but put up 38 goals and 52 assists during that stretch.

The success the team experienced this season is not just good for the players right now, but for the future health of the program as well.  Being so close gives the players currently on the roster fuel and motivation, but also gives Vignieri-Greener recruiting fuel.

The road back to the national tournament will not be an easy road next season.  UNLV will now be looked at as one of the preseason favorites to win the tournament next year, putting a target on their backs.  However, with the core of players they have and the coaching staff behind them, the sky is the limit for the UNLV Skatin’ Rebels.