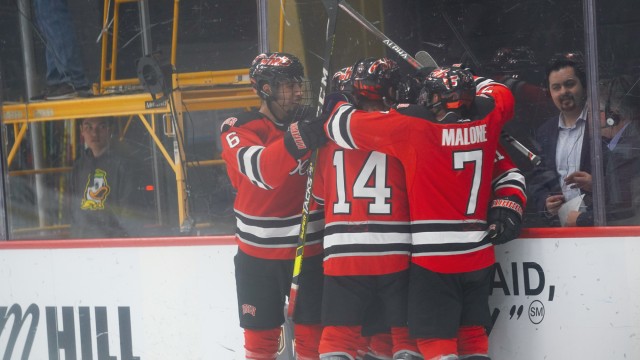 The UNLV Skatin Rebels faced off against the Oregon Ducks, Friday, in their final tune-up series before the National Tournament in St. Louis.

Scoring came at a premium for both teams, but the Rebels rode defense and timely goals to a 2-1 victory over the Ducks.

Midway through the first period, Oregon forward Jim Gagan opened the scoring for the Ducks.  Gagan scored on a two-on-one rush and beat Zach Wickson with a greasy goal.  Rebel senior Angelos Tsalafos evened things up three minutes later, deflecting a shot by Michael Boutussov past the leg of Henry Bradford to even things up at one

Both teams jockeyed for offensive control in the game, but both teams played sound defensive games to keep the other team at bay.

With four minutes left in the game, the 1-1 stalemate finally ended.  On a late powerplay, Nick Flanders snuck down the left wing and put a shot top-shelf to beat Bradford and give the Rebels a 2-1 lead.  Oregon’s final push was halted by a penalty with 9o seconds left in the game, allowing the Rebels to kill the dying seconds on the man advantage.

Flanders and Tsalafos, the two goal scorers for the Rebels, finished with the top two stars on the night.  David Lenzin, who picked up an assist on the Tsalafos goal, took home the third star for the night.  The team defense also played a massive role in the win tonight.  While the goals came at a premium, the Rebels were not giving up a ton of high-danger chances the other way.  They did a fantastic job limiting Oregon’s chances when they came into the zone and only gave up about three dangerous rush chances.

The Rebels regular season comes to it’s final conclusion Saturday night in a rematch against the Ducks.  For the graduating seniors, it is their final chance to play in front of the Rebel faithful.  Puck drop for the game is at 7:30 P.M. and can be viewed on the Rebel Hockey YouTube channel.

Be sure to follow the Skatin Rebels on all social media platforms for the latest updates regarding the team.