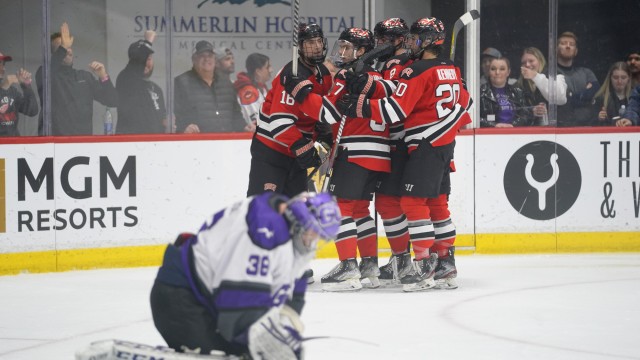 The UNLV Rebels faced off against the Grand Canyon University Lopes, Saturday, in a rematch of Friday night’s contest.

After a back and forth game, UNLV emerged with a 6-3 victory, sweeping the two-game series with GCU.

Cole Wyatt opened the scoring in the game, ending a 13-game goal drought.  GCU did not go away, however, and Korey Potach scored his second of the weekend on a broken play to even the score at one.

The second period saw GCU grab all the momentum in the game.  Similar to the previous night, they locked down the neutral zone and cut UNLV off from the middle of the ice. GCU eventually took the lead late in the second period thanks to a short-handed breakaway goal from Callum Tomlin.

That goal from Tomlin seemed to wake UNLV up, however, as Jason Dimizio scored shortly after to tie the game.  With five seconds remaining in the period, Angelos Tsalafos scored to give UNLV the lead heading into third period.

GCU did not allow that goal to kill their drive.  Five minutes into the third period, Nate Mohr tied the game at three on the power play.  Nick Flanders and Max Johnson added two goals 53 seconds apart to give the Rebels a 5-3 lead. Late in the game, Ezekiel Estrada scored a nifty backhand-forehand goal to give the Rebels a 6-3 lead.

Despite some penalty trouble late in the period, including a five-minute major penalty, the Rebels did not allow another goal.  The 6-3 lead held for the remainder of the game, and UNLV walked away with a 6-3 victory.

Jake Berry played one of his best games of the season.  He notched three assists on the night, but his defensive play was spectacular.

Vince Benedetto put together another strong performance in net.  After not playing the last three games, Benedetto came in and made key saves late in the second period to keep UNLV within striking distance.

UNLV has next week off before the final series of the weekend.  Up next, they face off against the Oregon Ducks, who will be making their first trip to City National Arena.  While the game will not matter in the context of the standings, it will offer UNLV the ability to fine tune their game heading into the National Tournament in St. Louis in March.

Be sure to follow the Skatin Rebels on all social media platforms for the latest updates on the team.