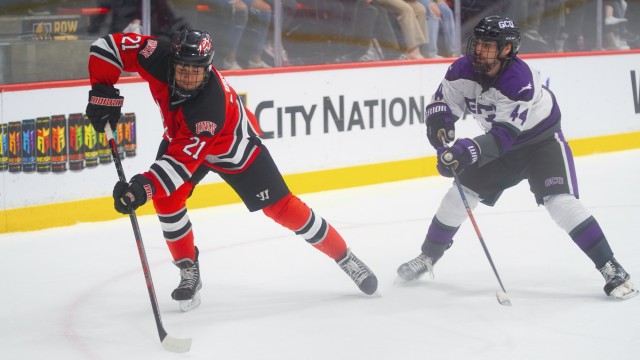 Rebels Hold On to Beat GCU 3-2

The UNLV Skatin Rebels played their first home game in over a month, Friday, in a rematch against the Grand Canyon University Lopes.

The Rebels walked out of Friday night’s game with a 3-2 victory, extending their home win streak to eight games.

The Lopes came back with a much better game plan and did not allow a goal from UNLV from that point on.  Kory Potach added one more goal for the Lopes to get them within one.

Late in the second period, Sean Plonski was assessed a five-minute major penalty and a game misconduct for spearing.  The UNLV penalty kill stepped up and did not allow a goal during the man advantage.

Despite some more pressure in the third period, the Lopes could not get the puck past Zach Wickson.  The 3-2 score held up, and UNLV walked away with another home victory.

Bradley Golant had another key performance for the Rebels.  After being moved up to the third line to play in between Max Johnson and Cole Wyatt, Golant shined in his new role.  His offensive instincts were on display in the game, and his defensive game was strong as well.

Scott Kasaboski shined in net Friday night for the Lopes.  He made 43 saves during the game and played a major role in keeping the game within striking distane for GCU.

GCU and UNLV get right back at it again tomorrow night in game two of their two-game set.  UNLV will be looking for a more consistant offensive attack, and the GCU Lopes will try to continue to stymie the potent UNLV offense.  Puck drop for the game will be at 7:30 P.M. and can be viewed on the Rebel Hockey YouTube channel.

Be sure to follow your Skatin Rebels on all social media platforms for the latest updates throughout the season.