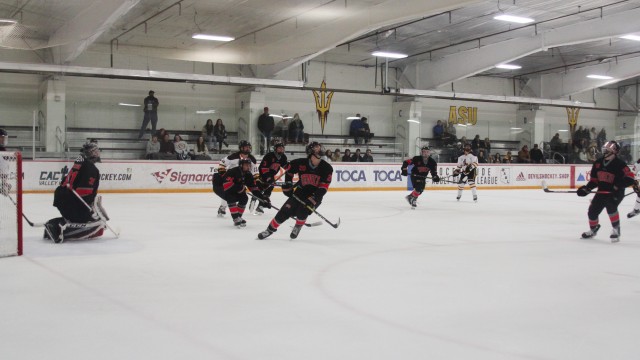 After a disappointing loss the night before, the UNLV Rebels looked to get even with the Arizona State Sun Devils, Saturday.

The Rebels managed to do just that, bouncing back with a 4-3 win over Arizona State.

ASU opened the scoring just under two minutes into the game.  UNLV battled back, and eventually their work was rewarded.  Brendan Manning evened things up for UNLV midway through the opening frame.  Hunter Muzzillo gave UNLV their first lead of the night on the power play shortly after.  However, with 57 seconds remaining in the period, Damon Porter added ASU’s second goal of the game to even things back up at two.

Bradley Golant and Ezekiel Estrada added goals early in the third period to give UNLV a 4-2 lead.  Shortly after Estrada’s goal however, Zachary Kowalchuk got one back for the Sun Devils to make it 4-3.

ASU ran with the momentum, but it was not enough.  Zach Wickson stood on his head in the final 10 minutes of the game to preserve the lead, making big save after big save.  The 4-3 score held up, and UNLV walked away with their second win.

Ezekiel Estrada has had a breakout road trip for the Skatin’ Rebels, picking up four goals in his last three games.  Saturday, he scored the game winning goal, which put the game out of reach.

Bradley Golant, who missed last night’s game, showed how impactful of a player he is for this team.  He had a fantastic game, generating numerous quality chances. He also scored the Rebels second power play goal early in the third period.

Time and time again, Zach Wickson has been the rock in net.  Saturday night, he was just that.  Despite allowing three goals, he made big saves down the stretch to preserve the lead for UNLV.

The Rebels finished the road trip with an impressive 4-1-1 record.  They head back home for a four-game homestand against Grand Canyon University and the University of Oregon before heading to St. Louis for the National Tournament.

Be Sure to follow the Skatin Rebels on social media for the latest updates.