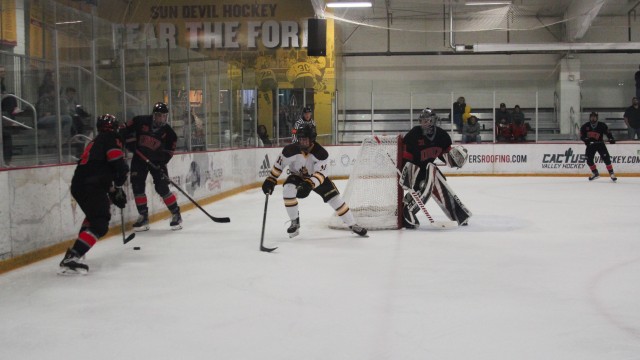 The UNLV Skatin Rebels faced off against the Arizona State Sun Devils, Friday, in a rematch of their series from mid-December.

UNLV dominated the first series against ASU, outscoring them by a combined 15-4 in both games.  Tonight’s outcome did not have that same result, as UNLV fell 4-3 in a shootout.

It took the Rebels a little while to find their legs in the game, but they capitalized on the few chances they had.  Ezekiel Estrada opened the scoring late in the first period.  Estrada found himself all alone in front of the net after a beautiful pass from Jack Kennedy and made no mistake putting the puck past Dawson Rodin to make it 1-0.  Angelos Tsalafos found some room under the right arm of Rodin and extended the UNLV lead shortly after.

The Sun Devils came right back and answered in the second period.  Damon Porter scored on the rush to make it 2-1.  Shortly after, Connor Kruk tied the game on the power play.

The lead did not last forever though.  Midway through the third period, Elliot Plourde scored to tie the game back at three.

The teams could not decide the game in regulation or in overtime, so they settled it in the shootout.  In the bottom of the fifth round, ASU scored the only shootout goal to win the game 4-3.

Fortunately, the Rebels do not have much time to mull this loss over.  They play ASU once again Saturday night and will be looking to avenge the previous night’s loss.

Be sure to follow the Skatin’ Rebels on all social media platforms for the latest updates regarding the team.