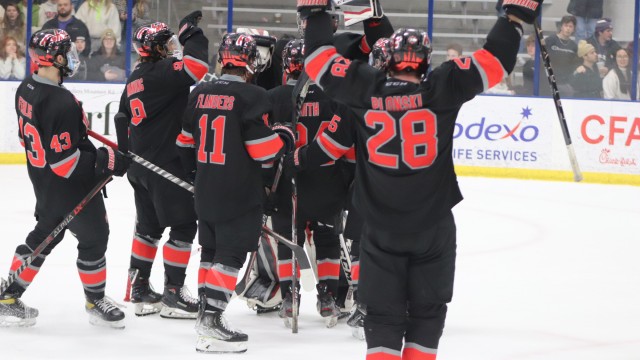 The UNLV Skatin’ Rebels entered Saturday’s match up looking to avenge the previous night’s loss to the Liberty Flames.

The Rebels were able to do just that.  In a much more defensive, low scoring game, the Rebels emerged with a 3-1 victory over the Flames.

Liberty opened the scoring on a power play early in the first period. Flames forward Jacob Kalandyk deflected a shot from Matthew Bartel passed Zach Wickson to make it 1-0.  In the second period, Alec Johnson evened the game up at one off a beautiful one-timer from the left face off circle.

The big turning point came late in the second period.  Jacob Kalandyk was called for a five-minute major penalty for hitting Michael Boutussov with the butt-end of his stick.  That gave UNLV a five-minute power play, and Johnson scored once again on the man advantage to give UNLV a 2-1 lead.

In the third period Bradley Golant nearly extended the lead for UNLV, but his shot went off the cross-bar, post, and stayed out of the net.  Paxton Malone had another opportunity on a penalty shot in the final eight minutes, but Hunter Virostek stoned his attempt. Liberty had a late power play of their own, but the penalty kill stepped up to kill it off.  In the final 40 seconds of regulation, Brendan Manning iced the game with an empty net goal to give the Rebels a 3-1 victory.

Alec Johnson played perhaps one of his best games of the season.  His two goals he picked up swung momentum in the Rebels favor, but his defensive play was nothing short of spectacular.  He made a lot of plays in his own zone to break up chances for the Flames.

Zach Wickson made his return to the lineup Saturday night and made an immediate impact.  After giving up the first goal of the game, Wickson settled in and put together one of his best performances of the season.  He made multiple big saves down the stretch to keep the Rebels lead in tact.

The Skatin’ Rebels have next week off before traveling to Tempe, Az. to face the Arizona State Sun Devils.  ASU will be looking for revenge after being outscored by UNLV 15-4 in the two games they played earlier in the season.  Puck drop for both games will be at 7 P.M. (6 P.M. PST).  Be sure to follow the Skatin’ Rebels on Twitter for a link to the live stream.