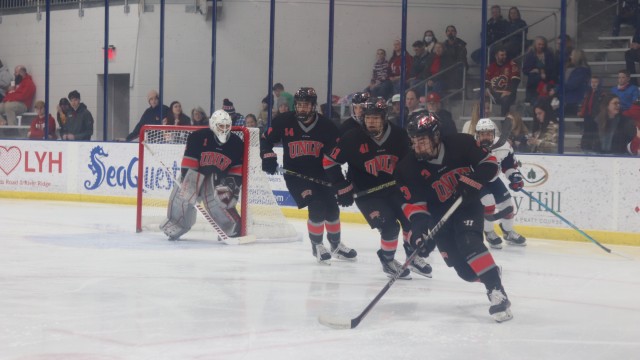 The UNLV Skatin Rebels traveled to Lynchburg, Va., Friday, to face off against the third-ranked Liberty Flames in the first game of a two-game set.

Unfortunately for the Rebels, their 16-game win streak came to an end Friday night.  The Flames rode their power play to a 7-4 victory over UNLV to take game one.

Rebels forward Paxton Malone opened the scoring for the Rebels just six minutes into the game.  UNLV controlled play for most of the period, but penalty trouble gave Liberty life. With just under four minutes remaining in the first period, Jason Foltz scored less than ten seconds into the man advantage to even the score up at one.  Less than a minute later, Kam Ottenbreit backhanded a shot over the shoulder of Vince Benedetto to give the Flames a 2-1 lead.  With 75 seconds remaining in the period, Matthew Bartel added the Flames second power play goal of the period to make it 3-1.

The Rebels got their first power play of the game early in the second period, but Ottenbreight scored shorthanded to give the Flames a 4-1 lead.  Ezekiel Estrada potted his first goal of the game to give the Rebels some hope with just over 12 minutes left to play in the second period.  But penalty trouble reared its ugly head once again.  Michael Boutussov was called for a five-minute major penalty and was kicked out of the game for spearing Liberty’s Nate Albers.  Alec Johnson was called for a tripping penalty two minutes into the kill to give Liberty a five-on-three opportunity.  Bartel picked up his second goal of the game shortly into the five-on-three opportunity to restore Liberty’s three-goal lead.

Alec Johnson ended his 13-game goal drought shortly into the third period to get the Rebels back within two.  Shortly after, Estrada collected his second goal of the game to make it 5-4.  The Rebels looked poised to tie the game, but Daniel Schwenke put the final nail in the coffin with just over 10 minutes remaining in the game to take a 6-4 lead.    Foltz added one more insurance goal with just over four minutes left in the game to give the Flames a 7-4 victory over UNLV.

Ezekiel Estrada added two goals and an assist for the Rebels in the game.    Estrada willed the Rebels back into the game and played one of his best games of the season.

The Rebels will face off against the Flames once again on Jan. 29, with a chance to right the ship.  Puck drop for the game will be at 11:59 P.M. EST (8:59 P.M. PST) and can be viewed on ESPN.com.  Be sure to follow the Skatin’ Rebels on Twitter for a link to the live stream.