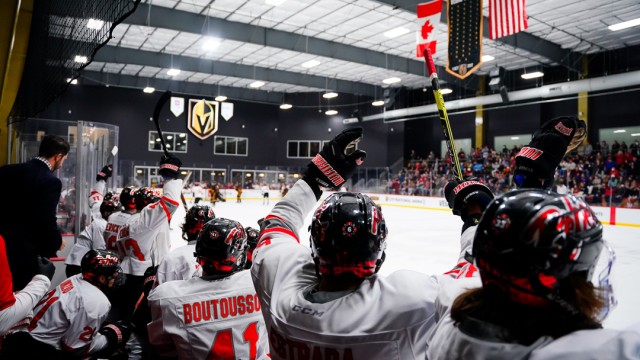 Rebel Hockey is proud to announce their first ever match up against a NCAA Division One opponent.

The team will face off in a three-game set against the University of Alaska-Anchorage Ice Wolves at the start of the 2022-23 season.

“We want to put ourselves on the map,” Skatin Rebels head coach Anthony Vignieri-Greener said. “[NCAA Division One] is where we want to be one day. That is our end goal.”

The deal was able to come through due to a variety of circumstances.  UAA needed a quality team to play in their preseason, and the Skatin Rebels have the ability to provide such a challenge.

The Skatin Rebels will head to the last frontier to take on the University of Alaska-Anchorage Ice Wolves for a two-game series on Oct. 14 and 15.

They will also play one game against the Ice Wolves at City National Arena on Nov. 16.  This will be part of a week-long hockey event where UAA will also play Liberty in Las Vegas.

This is a massive opportunity for the Skatin’ Rebels to get more recognition on a national scale.  This will allow Coach Vignieri-Greener and his staff to really see where the team is at skill wise.  The team has been dominant in the American Collegiate Hockey Association for the past few seasons.  Now, they get a chance to go up against a team that competes at the highest level of college hockey.

“It’s a big deal for our organization as a whole,” Skatin Rebels forward Brendan Manning said.  “The transition for our program to move into NCAA Division 1 has been up in the air for quite a while.  We find this opportunity to be one step closer to proving we are capable.”

Unlike in football and basketball, a team from a lower division playing an NCAA Division One school in hockey is highly uncommon.  There is not a sanctioned “lower conference”, such as the Football Championship Subdivision (FCS), so lower-level teams rarely have the chance to gain the exposure of the bigger schools.

“It will be exciting to see how the boys compete,” Vignieri-Greener said. “I know they are up to the task.  We have been recruiting higher-end kids that can compete at this level.  This is their chance to put their name on the map.”

Confidence within the team is at an all-time high.  The team firmly believes they are the best team whenever they step on the ice.  Even going up against a foe in a higher division than them has not shaken that confidence.

“I feel confident as always when it comes to this team,” Manning said.  “I believe if everyone does their part and brings the same level of confidence to the table as they have thus far, I am sure we will be happy with our results.”

A lot has gone into the Rebel’s rise in hockey prominence over the last few years.  This match up against a quality NCAA Division One program is just the latest in what the coaching staff has done to make the UNLV Skatin’ Rebels a premier hockey team in the ACHA.