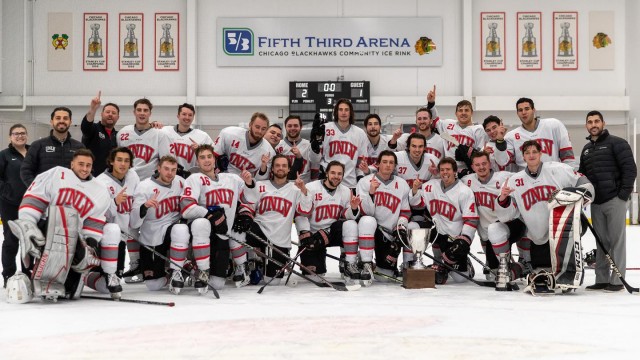 The UNLV Skatin Rebels participated in the Chicago Classic Tournament this past weekend, in a showcase of some of the American Collegiate Hockey Association’s best teams.

Despite playing three of the nation’s best team, the Rebels emerged from the weekend 3-0 and with the championship trophy.

“I’m really proud of the guys,” Skatin Rebels head coach Anthony Vignieri-Greener said.  “I’ve been here for six years with coach Nick [Robone], and this is the closest nit group we have had.  It was nice to see them win three in a row.”

HOW IT WENT DOWN

In the first game of the tournament, the Skatin Rebels faced off against one of the nation’s most dominant teams: the Adrian Bulldogs.

The Bulldogs had won the past two ACHA National Championships and were ranked sixth in the nation at the time.

These facts did not intimidate the Rebels.  From the opening puck drop, the Rebels showed why they were one of the top ranked teams in the nation.

Max Johnson opened the scoring for the Rebels in the tail end of the first period to give the Rebels a 1-0 lead.  26 seconds later though, the Bulldogs tied the game back up with less than a minute to play in the period.

Adrian added a second goal in the second period to take a 2-1.  Later on in the period, Nicholas Flanders scored to tie the game back at two.

Johnson scored his second of the game to give the Rebels a 3-2 lead.  Jayson Dimizio scored later in the period to add some insurance and put the game on ice.

Zach Wickson, as he has done time and time again, came up massive for the Rebels.  He stopped 31 of the 33 shots he faced and did not give the Bulldogs anything in the third period.

After knocking off the defending national champions, the Rebels moved on to face the Minot State Beavers.  Minot State, in their previous game, knocked of the Arizona State Sun Devils 11-1.

Their offense sputtered though, as Wickson and the Rebels held them to just one goal in the game.

Ezekiel Estrada opened the scoring for the Rebels in the first period with just 25 seconds remaining.  After collecting a turnover from behind the Minot State net, Estrada tucked the shot under the pad of the Beavers goaltender Jake Anthony to make it 1-0.

With 3:19 remaining in the second period, Johnson added his third goal of the tournament by sniping a shot past Anthony to take a 2-0 lead.

Davis Sheldon got one back for the Beavers on a power play with nine minutes to go in the game.  Wickson did not allow any more goals and the Beavers were unable to make up the deficit.

The Rebels closed off the weekend in the championship game against the Liberty Eagles.  Liberty came into this game ranked fourth in the nation – one spot ahead of the Skatin Rebels.

Jayson Dimizio opened the scoring in the first period.  The Eagles tried to answer back, but Wickson stoned them.

Throughout the second period, chances came for both teams.  However, the goaltending was the story. Wickson made some spectacular saves in the period to keep Liberty off the board.

With 9:43 to go in the game, Cole Wyatt added the final nail in the coffin. After cleaning up a rebound in front of the net, Wyatt put home his shot from the low slot to give the Rebels a 2-1 lead.

Liberty did answer back late in the game, but Wickson proved to be too tough of a puzzle for the Eagles to solve.

UNLV walked away with a 2-1 victory and the championship trophy at the Chicago classic.

“We deserve every bit of the ranking we were,” Vignieri-Greener said.  “One thing we have told everyone, is that we are not satisfied.  We are going to continue to win.

Zach Wickson, unsurprisingly, won tournament MVP.  Wickson finished the weekend with a 1.33 goals against average and a .956 save percentage.  He was electric in all three games, especially in the third period.

In both the second and third games, UNLV clung to a one-goal lead late in the game.  Wickson came up with timely save after timely save to make sure the lead was never surrendered.

After dropping two games in a row in October, Wickson has won six games straight and given up more than two goals only once during that span.  He has been one of the Rebels best, and most consistent, players all season long.  This tournament served to further that claim.