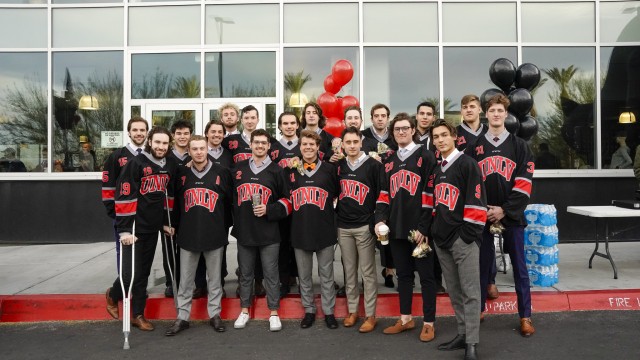 Rebels on the Rise After Strong Start to Season

Looking Back at the Rebels First Month of the Season

The Skatin Rebel’s first month of the season has come to an end, and the team is off to a fast start.

The team has jumped out to an impressive 7-3-0 record, including winning seven of their first eight games at home.

A Month in Review

The Skatin Rebels opened up their season with back-to-back sweeps over the Illinois Fighting Illini and Utah Utes.  While the team had some rust in each of these games, the outcomes were never in doubt.

Their lone road trip of the month came against the University of Central Oklahoma and did not go as planned.  The Rebels allowed a late game-winning goal in the first game and were completely dominated in the second one.

The hangover from that loss carried over into the first game against Arizona the following week.  They fell 4-3 in the first game before rebounding to win the second game 3-2.

Perhaps the biggest test of the month came in the final series against Missouri State.  The Rebels won a back-and-forth game the first night that was anyone’s game until the horn buzzed.  With Missouri State losing a game they could have won, it was expected that they would respond in a big way.  However, this response never came.  The Rebels completely dominated Missouri State, on route to their third straight win to close out the month.

“I like where we are at,” Skatin Rebels captain Jared Erickson said. “We started off hot, then stumbled a bit with our first road weekend. I’m looking forward to seeing what our team can bring.”

The Rebel’s home record is arguably the biggest takeaway from the opening month of the season.  Winning seven of eight at home is always nice, but the importance of this feat cannot be understated.  This has allowed them to jump out to an impressive record to start the season and has also allowed them to bank points for this upcoming road trip.

Alec Johnson and Max Johnson, tied for the team lead in points with 14 (6G, 8A), have been the focal point for the Rebels success.  A. Johnson has not only been a rock on the defensive side of the ice, but he has also been a key contributor to the offense as well.

M. Johnson has also scored some massive goals for the Rebels this season, including the game winner with less than three minutes to go in the game against Missouri State.

Zach Wickson has also been a major focal point for the team’s success.  In eight games played, Wickson has a 2.25 goals against average and a .919 save percentage.  In the first four games, while the team was trying to find its footing, Wickson came up with big save after big save to keep the Rebels from falling too far behind.

What Did Not Go Well?

The short answer to this question is not a lot.  The Rebels played very well for a team that had not played in almost two years.  That being said, not everything was perfect.

The biggest issue for the Rebels throughout the first month of the season was penalties.  The Rebels recorded a grand total of 201 penalty minutes in 10 games played. Some of those did include incidental minors, off-setting penalties, and fighting majors, but the Rebels were short-handed far more than they ideally wanted.

While the penalty kill played well through the first games of the month, it tapered off towards the end.  They have allowed nine power play goals total, including five in their final four games.

The penalty issues got significantly better towards the end of the month, which is a good sign for coach Vignieri-Greener’s team.  This is an issue that has been harped upon by the coaches and the leaders of the team, and it appears to be heading in the right direction.

The month of November is a complete 180 for the Rebels in terms of the schedule.  While they played four of their five series at home in October, they will play all of their series in November on the road.

This weekend, they begin their road trip in Utah to face off against the Utes once again.   As mentioned before, the Rebels swept Utah earlier in the season.  Now, they have to face the Utes in Utah.

“We have to have a fast start because they will be looking for blood,” Erickson said. “We stole a game from them and took them to overtime the last time we played.  They’re definitely going to have a target on our backs.  We’ll need to be ready to play.”

The previous games between the Utes and Rebels were both highly physical and highly chippy games.  Both teams recorded more than 30 penalty minutes in the two games.  It will be important for the Rebels to not fall into that trap and to stay out of the stuff after the whistle.

The Rebels and Utes drop the puck this Friday and Saturday at 7:00 P.M. MT (6:00 P.M. PST).  Be sure to follow the Skatin Rebels for live coverage of the game.  They will also be posting a link to where the game can be watched.