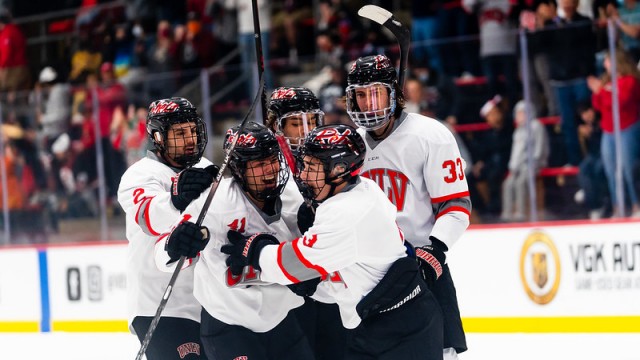 The UNLV Skatin Rebels faced off against the Missouri State Bears last weekend in the team’s fourth homestand of the season.

Despite the Bears being heavy favorites in both games, the Rebels showed why they were considered the preseason favorite to win the Western Collegiate Hockey League.  The pulled off a 4-2 victory Friday night and followed up with a 5-1 victory on Saturday night.

“Every time we walk into a building we expect to win,” Rebels defenseman Hunter Muzzillo said.  “That idea never changed for us.  I thought this weekend we played a much more complete game of hockey then we did last weekend.”

Entering the first game between the two teams, the cards were stacked against Missouri State.  They had just come off 22 straight hours of travel to get to the game. Rebels head coach Anthony Vignieri-Greener knew the team had to try to take advantage of the Bear’s long travel schedule.

However, an early power play goal by Bears leading scorer Jacob Wiethaupt gave Missouri State the chance to settle in.  This marked the fourth power play goal the Rebels had given up in the past three games.

The Rebels had their chances following Wiethaupt’s goal.  They had a 30 second five on three power play that was unable to connect and generated some pretty good scoring chances after.  Despite landing 15 shots on net in the first period, the Rebels were unable to solve the puzzle that was Bears goaltender Bailey Stephens.

In the second period, the Bears had an excellent opportunity to take control of the game.  UNLV committed back-to-back penalties, giving the Bears four straight minutes of power play time.   The Rebels killed both of and their fourth line began to swing the momentum.

Later in the period, the fourth line gave the Rebels their first break.  Bradley Golant scored his first goal of the season right on the doorstep to tie the game at one.

“We’ve been waiting [to contribute],” Michael Boutussov said. “We’ve had our chances and it feels good to finally capitalize on some and help the boys.”

Towards the end of the period, Missouri State’s Terrance Josephson took a high sticking penalty and gave the Rebels a chance to take a late lead.  Up until this point, the penalty kill for the Bears had stymied the Rebel power play.  They had done a good job of keeping everything to the outside, blocking shots, not allowing the Rebels to rip one timers from the face-off circles on goal. More importantly, they were not allowing any chances from the slot.

This time however, Ezekiel Estrada found the puck and despite being knocked off his feet, he was still able to get a shot away. He ripped the puck past Stephens to give the Rebels a 2-1 lead into the second intermission.

“I couldn’t have done it without my linemates,” Estrada said. “[Luke Burke] skated from one side of the ice to the other and passed it to Paxton [Malone].  Paxton has great vision and was able to find me.  I just shot it and it found the back of the net”

Jack Brachbill tied the game at two with just under ten minutes to play in regulation.  Both teams exchanged chances following the goal, but neither were able to find the back of the net.

With three minutes to go in regulation, Vignieri-Greener called a time out to discuss the team’s next steps.  The team won the faceoff and got to work in the offensive zone.  Then, after Alec Johnson stopped a clearing attempt by the Bears, Max Johnson fired a shot just under the cross bar to give the Rebels the lead with just over two minutes to play in the game.

Paxton Malone added an empty net goal with 17 seconds remaining to give the Rebels a 4-2 victory over the Bears.

“One of our messages on the board was that this was our best week of practice,” Vignieri-Greener said.  “Preparation translates into execution, and it showed that we got two points tonight.”

The Bears made one major change to their lineup.  Goaltender Bailey Stephens, who finished the previous night’s game with 37 saves on 40 shots, was replaced by Matt Griffin.  The Rebels elected to stay with Zach Wickson, after he allowed just two goals on 28 shots.

With the 22 straight hours of travel excuse out of the way, Missouri State was ready to get back and avenge the last game’s loss.

However, it was UNLV that struck first.  Less than three minutes into the game, Alec Johnson fired a shot from the point that took a weird bounce and skipped over the right pad of Griffin.

Two minutes later, the Bears answered right back.  After Brenden Manning was assessed a two-minute tripping penalty, Evan Ross scored to even the game at one.  UNLV had controlled play through the early part of the first period, but Ross’ goal looked to swing the momentum.

That momentum swing never came.  Despite outshooting the Rebels in the first period, they were not able to generate many high danger scoring chances at five on five.

When the second period rolled around, the Bears seemed to find their legs.  They dominated the early going, forcing UNLV to commit a series of turnovers in their own zone.  Fortunately, Wickson was there to keep the puck out of the net.

It took a few minutes, but the Rebels were able to get back to their game.  They were led primarily by their second line of Malone, Jayson Dimizio, and Luke Burke.  While the trio did not get on the scoresheet, they were noticeable the entire night.  They were constantly creating pressure in the offensive zone and generated loads of scoring chances.

“They really clicked at practice,” Assistant coach Nick Robone said. “Their hard work and communication paid off.  They did a great job tonight.”

Late in the period, the Rebels broke the stalemate.  After a shot from Max Johnson rang off the right post, the puck found its way to Hunter Muzzillo.  Griffin was unable to recover in time, and Muzzillo fired the puck into the open net to give the Rebels a 2-1 lead.

With less than a minute to play in the second period, Boutussov scored a back-breaking goal a breakaway to give UNLV a 3-1 lead entering the second intermission.

Cole Wyatt and Ezekiel Estrada added insurance goals in the third period.  The Bears looked completely out of energy and were unable to make up the deficit.

Knowing that Missouri State would be well rested, the Rebels came out and put on their best 60-minute performance of the season to complete the sweep over the Bears.

“It’s good [to come away with a sweep],” Robone said. “For us, we feel like we are the best team in the conference.  I think we [now] get back to work and stay humble.”

The Rebels face their biggest test on the year.  Over the next six weeks, they will play four straight away series.  It is imperative that they come away with at least half of the available wins.  With the national tournament getting closer, all points are critical.  While they cannot completely play themselves out of getting an invite, a poor stretch can put them in a hole that might be too big to get out of.

Make sure to follow your UNLV Skatin’ Rebels on all social media platforms.  They will post links to the live streams of the next four series where the games can be viewed.