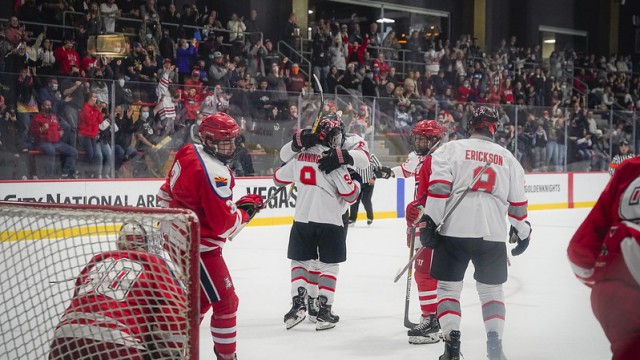 The UNLV Skatin Rebels squared off against the Arizona Wildcats last Friday and Saturday night in their third home series of the season.

After dropping the first game of the two-game set 4-3, the Rebels rebounded Saturday night with a 3-2 victory.

Special teams and turnovers were the main story of game one between these two teams.

The Rebels came out of the gate and controlled a majority of five-on-five play.  At the midway point, the Rebels were outshooting the Wildcats 8-3. However, a slashing penalty by Jared Erickson gave Arizona the chance to take the lead.

The Wildcats wasted little time on the man advantage.  Anthony Cusanelli scored just 21 seconds into the power play to give Arizona a 1-0 lead.

The Rebels pressed following the goal by Cusanelli, but Arizona goaltender Nolan Bivolic stood on his head to preserve the lead for the Wildcats.  The Wildcats were assessed a bench minor for too many men on the ice as the period ended, giving the Rebels a power play to begin the second period.

As he has done time and time again for Rebels on the season, Max Johnson put home a power play goal just 49 seconds into the second period to tie the game at one.

Brody Selman added another goal in the second period after a poor line change allowed him to sneak by the defense on a breakaway.  Despite being slashed on the way to the net, Selman was able to elevate the puck over the glove hand of Zach Wickson.

The Rebels tried to cut the lead before the period ended, but timely blocked shots by the Arizona defenders and Bivolic’s play in net kept them off the scoreboard.

Just before the period ended, the Rebels turned the puck over at the offensive blue line and allowed a two on one rush up the ice.  Matthew Marquis elected to shoot instead of pass and rifled a shot over the short-side shoulder of Wickson to give the Wildcats a 4-1 lead.

The lead proved to be too much in the end.  Despite goals in the third period from Hunter Muzzillo and Luke Burke, the Rebels were unable to make up the deficit.  They dropped their third straight game, and first of the season at home.

“When we walk into a building, we expect to beat whoever we are playing that night,” Muzzillo said. “We expect to win tomorrow.  We’ll take a look at the film, clean it up, and we’ll do it again tomorrow with a better result.”

Following the previous night’s loss, Rebels head coach Anthony Vignieri-Greener made a few changes to the lineup.  Chief among them was switching up the goaltenders.  Vince Benedetto drew in for Wickson.

The decision worked, as Benedetto helped guide the Rebels to their fifth win of the season.

Unlike the previous night, the game seemed much more even to start out.  The teams played evenly throughout the majority of the period.  Both teams had quality chances, but both goaltenders made big saves to keep the game scoreless.

In the final minute of the first period, the Rebels broke the ice.  After Arizona goaltender Anthony Ciurro lost sight of the puck behind the net, the puck was fished out by Ezekiel Estrada.  Estrada found Brendan Manning in the low slot.  Manning chipped the puck past Ciurro to give the Rebels a 1-0 lead.

Midway through the second period, Matthew Hohl scored on the power play to even the score.

The Rebels answered right back with a power play goal of their own from Alec Johnson to take a 2-1 lead.

The Wildcats had some grade-A opportunities to tie the game. However, Benedetto made quality saves at key moments to preserve the lead for the Rebels heading into the second intermission.

Shortly into the third period, Sean Plonski scored his first goal of the season on a redirected shot to give the Rebels a 3-1 lead.

Greg Malafronte made things interesting, scoring just over the halfway mark of the period.  Shortly after, Muzzillo took an interference penalty which led to a penalty shot for Duke Litwin.  Litwin tried to go forehand to backhand with his attempt, but Benedetto stayed with him the entire way and kept the puck out.

“I knew he was going to deke, and I just waited for him to make the first move,” Benedetto said. “I knew I needed to make the save if we wanted to get the win.  It was an awesome feeling.”

The Wildcats had a chance late with the extra attacker but were unable to find the equalizer goal.  The Rebels hung on to win the second half of this home series 3-2.

“I felt like we were good enough to win last night, but we just didn’t capitalize on our chances,” Vignieri-Greener said. “Tonight, we got chances and we capitalized on them.”

Benedetto recorded his first win for the Rebels this season in his second game in net.  He allowed six goals in his previous game against the University of Central Oklahoma Bronchos, but only allowed two on the night against Arizona.  He made some incredible saves in the third period to preserve the lead for the Rebels as well.

The Rebels improve to 5-3-0 on the season.  While a sweep would have been the ideal circumstance, a split is not the worst scenario.  Next week however, the Rebels face a daunting challenge.  They play the Missouri State Bears, who are coming off a sweep of the UCO Bronchos.  Puck drop for those games will be Oct. 29 and Oct. 30 at 7:00 P.M.