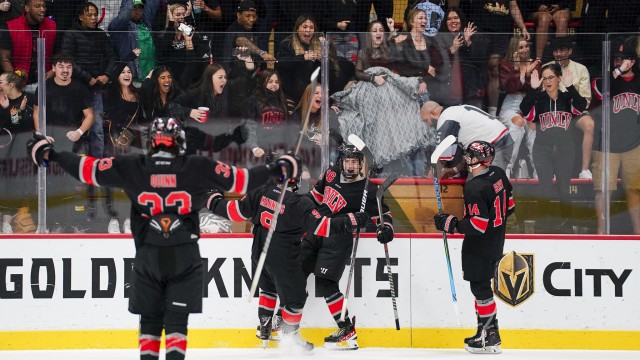 Prior to the Skatin Rebels second home series against the Utah Utes, Skatin Rebels forward Nicholas Flanders commented on the team’s confidence level going into the series.  He said the team had their way with Utah the last few seasons and was confident they were going to do it again.

Flanders’ prediction came true, as the Rebels came out of the weekend with a two-game sweep of the Utah Utes.

“That was what we wanted,” Head coach Anthony Vignieri-Greener said.  “Obviously we only think one game at a time, so we don’t get too far ahead, but to win the first four…I’m definitely proud of them.”

The Rebels knocked off the Utes 5-2 in their “midnight madness” game Thursday night and pulled off a dramatic 4-3 come-from-behind overtime victory Saturday afternoon.

Similar to the first two games the Rebels played against the Illinois Fighting Illini, this game did not lack on the physicality.  Despite not playing each other for close to two years, the rivalry between the two teams was clear.

The first period of game one was a goaltending duel.  Both Zach Wickson and Utes goaltender Landon Anderson came up with big save after big save to keep the game scoreless.  The Rebels were heavily outshot in the first period (16-8), but Wickson kept the dam from breaking as he as done throughout the early part of the season.

After a lack luster first period, the Rebels finally started to come alive.  With the 13:42 remaining in the second period, Brendan Manning fed a cross-ice pass through the neutral zone to the stick of Max Johnson.  Johnson skated into the left circle and ripped a shot past Anderson to give the Rebels a 1-0 lead.

“The goal was definitely a turning point for us,” Manning said. “We kind of bounced back after that goal and just kept them coming.”

Manning added another goal less than a minute later to give the Rebels a 2-0 lead.  The Utes finally answered with a goal shortly after from Michael Virits, but Alec Johnson added his second goal of the season, and the Rebels first power play goal on the season, to restore the two-goal lead.

The Rebels once again got themselves into trouble with penalties once again.  They finished the game with 16 total penalties, including seven in the third period.

The Utes came into game two looking much stronger than they did in the prior game.  They jumped on the Rebels early and were able to land the first goal of the game.  Despite being outshot 15-11 in the first period, the Utes were able to keep the Rebels potent offense in check.  They did a good job limiting the Rebels scoring chances.  When the Rebels did have chances, Landon Anderson was there to make the save.

The Utes added another goal in the second period to take a two-goal lead.  For the first time this season, the Rebels faced a deficit and desperately needed a response.  Their captain, Jared Erickson, provided that spark.  On a power play in the second period, Erickson put home a shot from the high slot to get the Rebels on the board.  The Rebels then pushed for the equalizer goal for the rest of the period but were unable to get another one by Anderson.

The Utes added another goal from Wyatt Light to take a 3-1 lead in the third period.  Things looked bleak for the Rebels, until Ezekiel Estrada cleaned up a loose puck in front of Anderson and rifled the puck into the back of the net.  Less than two minutes later, Alec Johnson scored on the power play to tie the game at 3.

“It shows the grit that our team has and the potential that we have,” Erickson said. “I’m definitely proud of our guys [and how they battled back].”

The Utes got one more chance to regain the lead shortly after Johnson’s goal on the power play, but Wickson made a diving save across the net mouth to keep the puck out of the net.

The game went to overtime after both teams failed to score again in regulation.  22 seconds into overtime, Rebels senior Jayson Dimizio beat Anderson over the glove hand to give the Rebels a 4-3 win in overtime.

“[That goal] felt great,” Dimizio said. “It was my first goal.  I needed it.  It was definitely a good way to end the game.”

Max Johnson continued his stellar level of play for the Rebels.  He finished with five points for the weekend.  This included a monster four-point game from in the first game where he recorded two goals and two assists.

Alec Johnson also had another stellar weekend for the Rebels.  He played a major role in the second game, including the game-tying goal and the primary assist on the game winner by Dimizio.

Cole Wyatt also had a standout weekend as well.  Wyatt picked up four points this weekend (one goal and three assists). He showcased his vision and passing in both games, played fast and was also one of the few players who did not take any penalties through both games.

Zach Wickson continues to play at an incredibly high level.  In the first period of the first game, when the Rebels were struggling with the speed and tenacity of the Utah forecheckers, Wickson kept the door closed.  He made some big saves in the second game as well to keep the Rebels within striking distance.

The Rebel’s biggest test of the season comes this week, when they travel to Central Oklahoma Bronchos.  Both teams are ranked in the ACHA top 10 and are currently undefeated.

“We’re confident,” Dimizio said.  “I know these boys are going to work hard.”