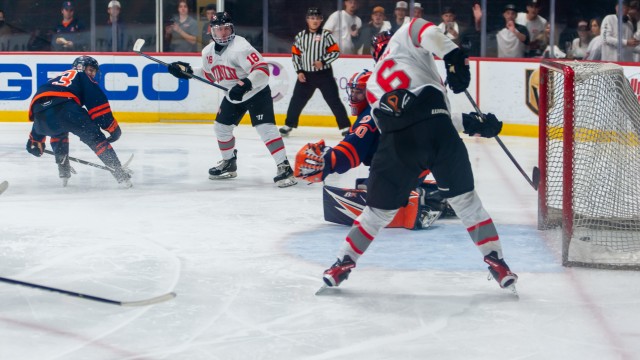 UNLV Sweeps First Series on the Season against Illinois

The Skatin Rebel’s played their first home series in 20 months last Friday, against the University of Illinois Fighting Illini.

Thanks to some stellar goaltending, timely goals, and top-notch penalty killing, the Skatin Rebels were able to sweep their opening home series.

“To get four points opening weekend, that is what you want,” Rebel’s head coach Anthony Vignieri-Greener said.  “I’m proud of [the team], I know the coaching staff is proud of them, and they earned it.”

No matter how hard coach Vignieri-Greener could have prepared the team, it is impossible to fully simulate game speed.  When the first game against Illinois started, the Rebels looked like they had not played in a while.  The team had a hard time generating much offensively through the first five minutes of the game.  The team got into some early penalty trouble – a theme that would carry over throughout the game.

After the Rebels finally got some sustained pressure after the 15-minute mark, captain Jared Erickson ripped a one-time shot past Illinois goaltender Elliot Gerth from the slot to give the Rebels their first lead of the game.

“Every goal against Illinois is huge,” Erickson said.  “To go through the adversity we went through early on in the game and come out with a goal is pretty huge for us.”

Alec Johnson got the Rebels on the board in the second period with 11:52 remaining.  Two minutes and 26 seconds later, however, Alex Matveev scored for Illinois to cut the lead to one.  Just before the period ended, Johnson scored once again to give the Rebels a 3-1 lead entering the second intermission.

Max Johnson got the Rebels on the board four minutes and 10 seconds into the third period off a beautiful back and forth passing play with Luke Burke.  Despite six penalties being called against the Skatin Rebels in the third period, Illinois was unable to capitalize on any of their power play chances. They managed to blank the Fighting Illini in the third period to cruise to a 4-1 win.

Zach Wickson, who received first star honors for the game, finished with 25 saves on 26 shots.  Wickson was a rock in net all night long and help keep the Rebel’s from falling apart early in the game.

“He stood on his head tonight,” Vignieri-Greener said.

Unlike in the first game, the Rebels came out strong throughout the first period.  They landed the first 11 shots of the game on net and were absolutely suffocating in all three zones.

Gerth stood on his head for Illinois in the beginning of the first period but could not keep the Rebels off the score sheet forever.  After 11 minutes had gone by, Max Johnson got the Rebels off and running after deflecting a shot in from the blue line.

The Rebels had everything going right for them in the period, but one bad bounce led to a goal from Matveev to tie the game at one.

Sean Plonski, Cole Wyatt, and Nicholas Flanders all notched goals in the second period to give the Rebels another 4-1 victory.  It appeared the Rebels were going to cruise to their second straight win.  However, that was far from the case.  Illinois had 3 clean breakaways in the period, a penalty shot, and five power play opportunities in the tail end of the second period.  Fortunately, Wickson was once again up to the task and only allowed one goal in the period.

Illinois scored early in the third period to cut the deficit to just one goal.  UNLV once again found themselves in serious penalty trouble, but their penalty killers saved the day.  On the 11 penalties the Rebels had in the game, they allowed zero power play goals.

“[Bradley] Golant and [Michael Boutoussov] are animals out there,” Flanders said.  “They wreak havoc and play a fast brand of hockey.”

With just over a minute remaining in the game, Brendan Manning scored on an empty net to give the Rebels a 5-3 lead.  This effectively iced the game, and the Rebels picked up their second straight win.

In the face of incredible adversity, the team showed their mental fortitude.  At any point, the penalty trouble could have caused the team to fold.

“We found out a lot about this group tonight,” Hunter Muzzillo said.  “We had a lot of opportunities to crumble in that third period.  It looks like we have a pretty good group in there with how we battled all the way to the finish.”

The Rebels have little time to celebrate these two wins.  They play the Utah Utes on Oct. 7 and Oct. 9 in their second straight home series.  Puck drop for those games are at 11:59 P.M. and 12:20 P.M.