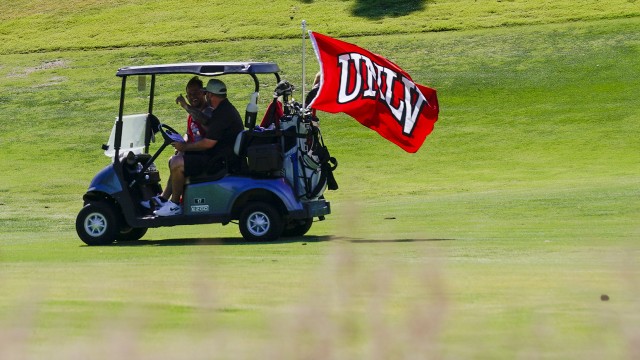 The 144 participants gathered at Revere Golf Course in Henderson, NV to compete. While prizes and awards were handed out to those who finished with the best scores, each participant was there with a common goal: supporting UNLV Hockey.

“This has been our biggest event for the last six years,” Assistant coach Nick Robone said. “It is a lot of fun for all the players, our guys, as well as the volunteers.  It is a good time for people to let loose, drink a little bit, and support Rebel Hockey.”

Teams of three and four began teeing off shortly after 8:00 A.M. They were treated to 18 unique holes at Revere Golf Course, ranging from basic holes to a hole with DJ lessons, to a hole that allowed them to tee off with a golf ball launcher.

The fun was not limited to the course.  Inside the clubhouse, participants were treated to a raffle with prizes ranging from Rebel Hockey memorabilia to autographed Golden Knights gear, and beyond.

“The support has been crazy,” Mike Tomko said.  “[We are getting] more and more sponsors for the tables and holes.  We could easily have 200 people here.  But the community support has been absolutely amazing.”

Over the last six years, the tournament has steadily grown.  What started out as a 72-man tournament has grown to double in size, to the point where they have waiting lists to get in.  More importantly, the event is selling out sponsorship slots with new and returning sponsors.

“Everyone wants to be a part of this,” Robone said.  “That just goes to show the testament to our staff.  I think we might need to find a bigger course next year.”

For UNLV Hockey, the event means so much more. The sport of hockey has grown exponentially in popularity since the arrival of the Golden Knights 2017. The tournament not only allows them to raise money for their season, but it also offers them the chance to get their program noticed.

“This definitely helps us get our program noticed and spread the word of UNLV Hockey,” Rebels captain Jared Erickson said. “Our program has been growing every single year.  We look forward to continuing that with all the sponsors we have here.”

The Rebels open their season this Saturday, Sept. 4 with their Scarlet and Gray scrimmage.  This will serve as their main tune up before they drop the puck for real on Oct. 1 against the Illinois Fighting Illini.