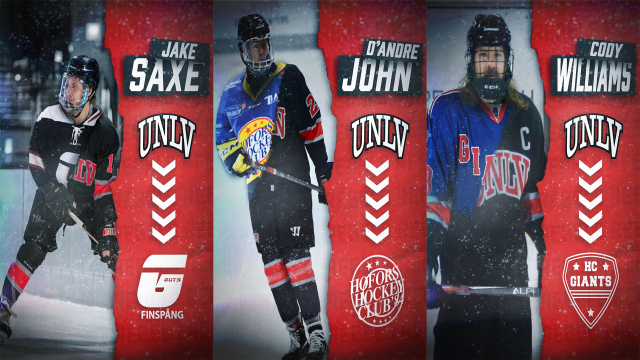 The Rebel Hockey family is proud to announce that three former players have signed deals to play professionally overseas.
Former players D’Andre John and Jake Saxe have agreed to deals with the Swedish Hockey League.  Cody Williams has also agreed to a deal in the Finnish Hockey league.
D’Andre John
John began his hockey journey at the age of three years old. Being from Toronto, hockey had been engrained in him at a young age.  After his first time playing, he fell in love with the sport and never looked back.  John came to UNLV in the 2018 season and played for two years.  During that time, John recorded 26 points in 39 games with the team.  After the COVID-19 pandemic shut down not one, but two of the Rebel’s last seasons, John began searching for other options to continue his playing career.
“Sal Caggulia contacted me saying the coach of Hofors HC wanted to get in contact with me,” John said. “He had seen me play before and it ended up working out.”
John will be heading over to Hofors, Sweden on Aug. 27 to play for Hofors HC.  The biggest thing he is looking forward to in this new chapter is being able to extend his playing career. “The fact that I am still playing at 25 is amazing.” John said.
Jake Saxe
Growing up in Montreal, Jake’s parents got him involved early in hockey.  Saxe played four seasons with the Rebels.  During that time, he racked up 105 points in 105 total games.  His last two seasons with the team, he served as an alternate captain.
“I think [playing with the team] was great,” Saxe said.  “I came in as 20-year-old freshmen and matured a lot.  I played a lot of minutes, and the coaching staff was very welcoming.  It was like a family, which made you want to stay and get better every year.”
After finishing his career at UNLV, Jake looked to continue his playing career elsewhere.  Despite things not materializing right away, Saxe and his team continued to press forward.  About a month into signing, he entered contract negotiations with multiple teams.  After some back and forth, he found his new home with the IK Guts in Finspång, Sweden.
Cody Williams
Cody Williams grew up in Las Vegas and started playing hockey at the age of three, thanks in part to his older brother.  At age 23, Williams had just finished playing minor league hockey and was looking for something new.  That is when assistant coach Nicholas Robone gave him a call to offer him a spot on the UNLV Rebel’s hockey team. Williams spent four seasons with the Rebels, where he racked up some very impressive numbers.  In his time spent at UNLV, he recorded 191 points (99 goals, 92 assists) in .  In the 2019 season, he was named captain of the team.
After finishing his time at UNLV, Williams moved to France to join the Jets d’Evry Viry Centre Essonne in Evry, France.  He played 18 games with the team, recording 13 goals and 18 assists before the COVID-19 Pandemic ended the season.  After a year out of the game, Williams worked with his agency team and landed a spot on the HC Giants in Hollola, Finland.