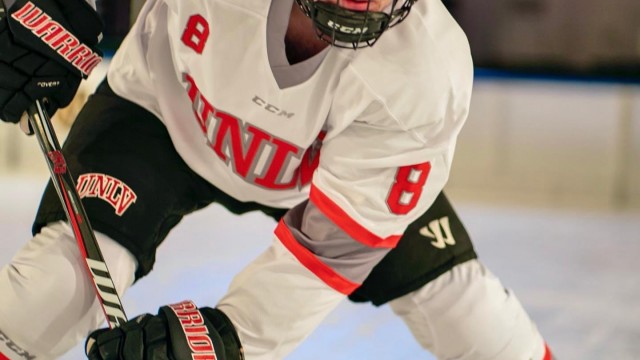 Rebel Hockey has officially named Jared Erickson as their captain for the 2021-22 season.

The fifth-year senior takes over as the fifth captain for the Skatin’ Rebels since their move to division one in the American College Hockey Association.

“I found out I was going to be a captain through coach Greener,” Erickson said. “He had reached out and asked me how I felt about a leadership role and being the captain of the team. Obviously, I was really excited, ecstatic, and kind of in disbelief. To be named the captain and voted on by your peers, it really meant a lot to me.”

Erickson was born on Feb. 14, 1996.  He began playing hockey at the age of five in his hometown of Waupaca, Wisconsin.

Erickson played two seasons with the Iowa State Cyclones before transferring to UNLV.  In those two seasons, he registered 18 points.

“I had a buddy that was out here, and I asked him about the coaching staff,” Erickson said.  “They have such a top-notch program out here.  I was really excited to reach out to coach Greener and to have him welcome me with open arms, it meant a lot to me.”

Erickson was an alternate captain in the season previous.  He registered seven goals and 12 assists in 34 games played in his first season with the Rebels. After a year off due to the COVID-19 Pandemic, Erickson is looking forward to competing once again.

“I am thrilled [to be playing again],” Erickson said. “It was kind of weighing on me whether or not I was going to take a fifth-year.  When it came down to it, I felt uneasy with closing the book on my hockey career.  I just wanted to have one last ‘kick of the can’ and give it one last full season.”

Part of being a captain is the pressure and expectations that are associated with it. Not just internally, but externally as well. Instead of looking to someone else to be the voice, Erikson will be expected to provide that for his team.

“I think there are a lot of challenges in a leadership position,” Erickson said.  “One of the challenges I will be presented with is managing the guys on the bench and locker room, [as well as] keeping the emotions levelheaded.  Also making sure guys are living up to the ‘Skatin Rebel’ standard.”

Despite the pressure, the team is excited to showcase what they can do.  Erikson noted that all 30 players and coaches welcome the challenge that a new season will bring.  As for himself, Erikson wants to put his best foot forward every day he comes to the rink.  This is his last shot to play competitive hockey, and he wants to make it count.

The Skatin’ Rebels drop the puck for their first intersquad scrimmage on Sept. 4.  Their home opener will be on Oct. 1 against the Illinois Fighting Illini.  Tickets can be purchased at www.rebelhockey.com (placeholder).