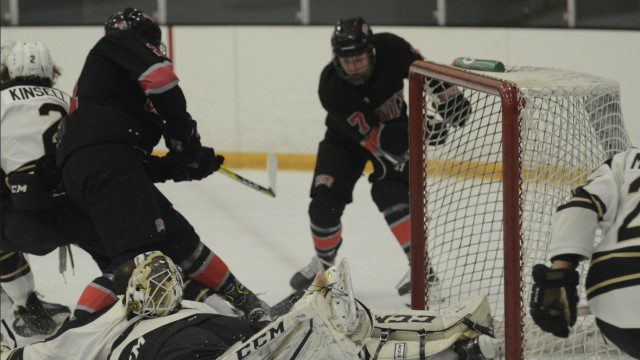 COLORADO- With the National Tournament looming, teams were trying to fight for positioning in the final week before the final field of twenty teams is announced this week. For UNLV, currently ranked 13th, that meant a three game trip to Colorado to face Colorado State and Colorado University.

First stop on the weekend was a Thursday night meeting with the CSU Rams in Ft. Collins. And as in years past, CSU gave them all they could handle. The Rebels though were able to come away with a 4-1 win. Daniel Fisher scored the only goal in the first period. Jake Saxe had three points in the game (2G, 1A), including what ended up be the winning goal in the second period. Kirk Underwood and Jayson Dimizio were both also able to register two assists in the contest. Paxton Malone ended the scoring with a goal with roughly three minutes left in regulation. David Anderson stopped 26 of 27 UNLV shots for his eighth win with UNLV this season.

The next night, UNLV would travel to Boulder to play Colorado University in a two game series. Colorado started the scoring in the first period, but then UNLV responded with three unanswered goals by David Lenzin, Eric Williams and Paxton Malone, before the Buffs added what would be their final goal of the game to make it a one goal game. Orion Linnenhan added one at the buzzer to make it a 4-2 game after the first period. Daniel Fisher scored for the second straight game to make it 5-2 UNLV after two periods. Jared Turcotte added two goals in the third period and Jake Saxe added one as well, giving UNLV an 8-2 win. The Rebels outshot the Buffs 33-25 in the game. David Anderson stopped 23 of those Buffs shots to earn the win for the second straight night.

Playing their third game in three nights, Saturday’s game was a challenge as Colorado gave them everything they had with the Rebels coming away with a close 5-4 win. Colorado would start the scoring again in the 1st period, but then Paxton Malone, who continues to find the back of the net, gets the game evened. Colorado took a 2-1 lead early in the second period, only to see Kirk Underwood score a pair of goals later in the period to give UNLV a 3-2 lead. Malone added his second goal of the contest to give the Rebels a 4-2 lead. Colorado trimmed the lead to 4-3 with a goal with just six seconds left in the 2nd period. Eric Williams scored later in the third period off the stick of Turcotte to make it 5-3, followed by a Buffs goal a minute and 40 seconds later to make it a one goal game again. Rebels fought through the rest of the way and held on for a 5-4 win. Anderson, playing his third game in three nights, gave up more goals in this game then he did in Thursday and Friday’s games combined, but still managed to secure his tenth win in an UNLV uniform.

The Skatin’ Rebels, after starting the season 2-7-1 on the road, win their last five road games of the season to finish 7-7-1 away from Las Vegas this season. Overall, their record for the regular season ends up at 22-13-1. While we expect the team to be in the ACHA D1 tournament for the third straight season, the final seedlings, opponents, time and dates will be released on Wednesday.

The tournament takes place in Frisco, Texas starting on Thursday, March 19th and will run until Tuesday, March 24th.

Stay tuned to our website and social media channels on information and coverage regarding UNLV’s participation in the ACHA tournament.