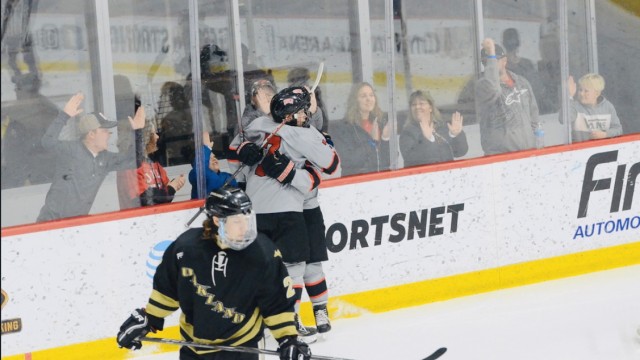 UNLV split a two game series with Oakland University last weekend at City National Arena in the teams final home series of the season. UNLV won Friday’s game by a score of 6-3 after UNLV responded with four unanswered goals after Oakland opened the scoring in the game. Paxton Malone and Jake Saxe both recorded two goals in the game.

Saturday night was senior night and the Rebels came back from a 2-0 deficit in the third period, only to see Oakland finish with three unanswered goals to win the game 5-2. UNLV finished the home portion of the season with a record of 15-6.

With one week left in the regular season, UNLV remains at #13 in the ACHA rankings. The team’s goal is to qualify and be in the top 12 which will make the path a little easier and avoid having to play the first day in the ACHA tournament and to be faced with a potential 10am central time game that they have faced the last two seasons. The previous two seasons, UNLV received the 13th seed and won the first game before losing in both years to #4 Ohio, who had an extra day of rest coming into the game.

Thursday’s opponent Colorado State is coming into this contest playing some of their best hockey of the season. They are currently on a six game winning streak with a pair of wins over Eastern Michigan, Utah, and Colorado during the streak. CSU also has a win over Arizona, Oklahoma and Missouri State. CSU is 7-10-1 at home with three wins coming in the shootout. This will not be an easy game for UNLV by any means.

Colorado University is struggling this season to say the least. The first year Buffs head coach Brent Tollar’s team comes into the final weekend of the regular season with just one win this season (1-23-5). They are winless at home (0-12-4). Their only win this season came on the road on October 5th against Missouri State.

All three goaltenders have goals against averages of over four, with Grant Payne being in net for the only Colorado victory this season (1-20-0, 4.70 GAA).

This team also has racked up a lot of penalties, as nine players have at least 22 penalty minutes this season, seven with at least 30 minutes. Ryan McAuliffe has the dubious honor of leading the team in penalty minutes, racking up 56 PIM’s in 26 games played.

- Control Own Destiny: Where they end up in the national tournament will be determined a lot by how this weekend goes, they must win these games and by a good margin if they have any hope to move up any to be in the coveted top 12 in the tournament.

- Adjusting to the Elevation change: A good workout and warm up Thursday morning for the players will help them adjust to the elevation change between Las Vegas and Colorado and prepare to play three games in three nights.

Follow along on social media for updates and results throughout the weekend, and links to watch the games online will be posted on game days.