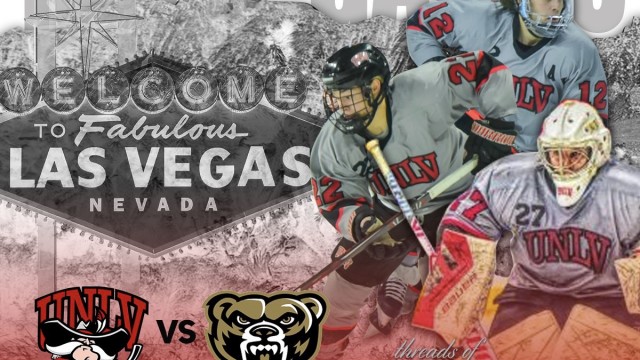 UNLV dominated Arizona State, sweeping them in a two game series at City National Arena last weekend. UNLV outscored the #14 Sun Devils 15-3 over the two games. Jake Saxe and Bas Assaf both registered their 100th point in a UNLV uniform during the series. UNLV jumped from #17 to #13 in the latest ACHA rankings as a result of the victories.

After registering four assists last weekend, Forward Jayson Dimizio is now leading the team in scoring for UNLV with 24 points (7G, 17A). Paxton Malone and Jake Saxe remain close behind with 23 points. Paxton Malone still leads in goals with 16. John Moeller has continued to see a resurgence in the second half of the season, adding two more goals last Friday against ASU. Moeller has now recorded nine goals since the team returned from break in January. Overall he ranks fifth on the team in scoring with 21 points (12G, 9A).

Goaltender David Anderson continues to be solid for the Rebels in net. Only giving up three goals over the two games last weekend, going 2-0, he moves his record to 6-3-0 with UNLV and 10-3-0 overall this season between here and Jamestown. His goals against average is down to 2.02 and save percentage is .917. Those numbers are good enough to be ranked number seven in the ACHA among goaltenders.

Golden, But Not in California

Oakland University is not located in California, but in Michigan as the school is located in Rochester Hills, Michigan and has been opened since 1957. They are members of the GICHL conference and are coming off a pair of losses to Calvin in a home-and-home series. Last season, Oakland University finished with a 12-15-3 record. Oakland comes into this series with a 19-8-2 record (7-4-1 on the road).

Three players are leading the Golden Grizzlies with 37 points. Forward Cameron Schwartz has 20 goals (leads the team) and 17 assists. Forward Chase Serano has 18 goals and 19 assists and Forward Brendan Smith has 14 goals and 23 assists (leads the team). Jeremy Schwartz also registers over 30 points this season with 31 (14G, 17A). As a team, six players have recorded over 20 points and 12 players have at least 11 points.

This is the first ever meeting between Oakland and UNLV.

This weekend (Saturday), the team will be honoring their three seniors; Tristan Mayer, Jake Saxe and Goalie Erik Eidissen. All three will be highlighted on the team’s social media pages and will be honored in a pregame ceremony before the game on Saturday Night. In addition to that, the first 150 fans at the game on Saturday will receive a special senior send-off t-shirt courtesy of Original Vegas. The title sponsor for Saturday is Threads of Envy.

- Do it for the Seniors: If they needed any motivation, playing for the three seniors being honored in their final games in front of the home crowd will be important. Expect a big weekend for Saxe, the only one of the three that will actually be able to play.

- Don’t be comfortable: Oakland may be lower than UNLV in the ranking, but they will be determined to make a statement to try to snag a tournament birth. Expect Oakland to give UNLV their best and if the Rebels are not ready, it could be trouble.

For tickets, visit rebelhockey.com/tix or purchase in person at the game at City National Arena. Tickets are just $15, but are free for UNLV students with a valid student ID. Also, for Saturday’s game, Kids 12 and under are FREE.

The games will be streamed live on the UNLV Hockey YouTube channel with Dana Lane behind the mic. You can also follow UNLV Hockey on social media for updates and content from the games throughout the weekend.