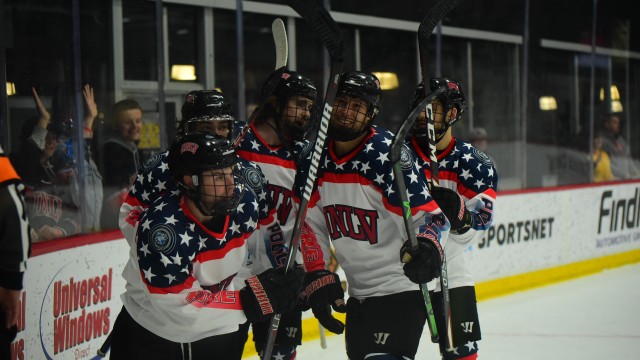 LAS VEGAS- With only a handful of games left in the regular season, UNLV Hockey is still  making the push for the ACHA national tournament. After dropping a spot despite splitting with #5 Arizona the week prior, the team knew they would need to have a statement weekend to help prove their case.

What better opportunity than taking on the 14th ranked Arizona State Sun Devils as part of Military and First Responders appreciation weekend at City National Arena. The Rebels did that in a big way, not only defeating ASU both nights, but outscoring them 15-3 (10-2 Friday, 5-1 Saturday) on the weekend to improve to 18-12-1 (14-5 at home).

Before Friday night’s game, Malcom Subban of the Vegas Golden Knights was on hand to help with the festivities and participated in the ceremonial puck drop. As a nice touch, the starting goaltenders for UNLV and ASU met up with Subban for the drop. Also, Golden Knights anthem singer Carnell Johnson (aka “Golden Pipes”) performed the national anthem. Also, before both games, in a touching moment, the team asked all members of military and first responders in attendance to stand and be recognized by everyone else in attendance.

In Friday’s game, UNLV finished the game with ten goals. It’s only the second time this season they have scored ten goals in a game. The previous time was on October 12th at City National Arena against the Utes. They scored nine goals on January 24th in Utah and also had an eight goal and several seven goal games.

Two UNLV players reached a big milestone last weekend against Arizona State. Assistant Captain Jake Saxe and Captain Bas Assaf both reached the 100 point mark in their UNLV careers. Jake Saxe scored the Rebels seventh goal of the game at the 7:03 mark of the third period in Friday’s game, and then later assisted on the 10th and final goal for UNLV in the game, registering his 100th point. Saxe also added an assist in Saturday’s game, which gives him 101 points in his UNLV career, which is in his fourth year.

”It’s Huge. It’s a special honor to get. I’m lucky enough to been here for four years. Didn’t play to much last year cause of injury, so it’s nice to get that milestone done with and we’re movin’ on up from here.” – Jake Saxe

Captain Bas Assaf hit the 100 point milestone on Saturday night when he scored the Rebels first goal of the game at 7:35 of the 1st period as the puck bounced off a couple players and found Assaf’s stick who lifted it over the shoulder of ASU goaltender Bronson Moore and into the net. The goal was his 4th of the season and 14th point this season, but the 100th of his UNLV career, also in its fourth season.

“I’ve never even cracked 50 points in my career, so hitting 100 was a huge milestone, I’m very happy about it. I’m just really blessed to be with this program. I’m very happy.” – Bas Assaf

Everybody Getting in on the Fun

The Rebels saw scoring from up and down the roster. In Friday’s game, the first eight goals were all scored by different players. Tsalafos, Malone, Plonski, Erickson, Flanders and Saxe all lit the lamp. Only John Moeller and Brendan Manning scored more than once as both scored twice. In Saturday’s game all five goals were scored by different players; Assaf, Flanders, Underwood and Manning. Colin Robin, who was inserted into the lineup for Saturday’s game, and who hasn’t been in many games this year, got his first goal of the season.

Movin’ on Up in the Rankings

With the two big wins against Arizona State behind them, UNLV moves up to #13 in the latest ACHA ranking. There is still five games to go, but UNLV is doing their part to make sure they will be participating in the ACHA National Tournament in Frisco, Texas in March.

UNLV will finish the home portion of the schedule with a two-game series with Oakland University this weekend. Friday night, Goolsby Elementary will be in attendance to perform the National Anthem. Saturday night is Senior Night, where they will be honoring Jake Saxe, Tristan Mayer and Erik Eidissen. And First 150 fans will receive a FREE limited edition 2020 Senior Send-OFF T-shirt courtesy of Original Vegas.

Both games will start at 7pm at City National Arena. Tickets are available at rebelhockey.com/tix. Kids 12 and under are free for Saturday’s game.