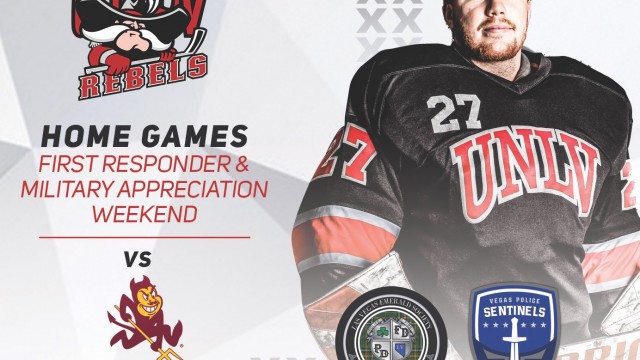 UNLV split a two game series with #5 Arizona Wildcats last weekend at City National Arena. UNLV won Friday’s contest 4-3, but lost the next night by the same score. The Rebels moved down a spot in the ACHA rankings as a result of the split and now find themselves ranked 17th as the push for the ACHA national tournament continues. This season, UNLV is 12-5 at home.

Tait Green’s ASU Sun Devils team is having quite the rebound season this year. Last year, ASU was 8-29-3, but this year is coming into Las Vegas with a 21-7-1 record and a #17 ranking. ASU is currently on a nine game winning streak. Most recently, they are coming off a weekend sweep in Phoenix, AZ against Grand Canyon University (8-3 win on Friday and 5-4 OT win on Saturday). During the nine game winning streak, which has included two road wins in Tucson against the Wildcats, the Sun Devils have outscored their opponents 46-19. While the strength of some of their opponents during that stretch is not as strong as UNLV, that is still an impressive differential.

As a team, ASU has six players with at least twenty points. Eleven players on their roster have at least eleven points. Compare that with just a season ago, when ASU’s top scorer only had 17 points and no player had scored more than seven goals.

#19 Clayton Lackay leads this year’s team with a strong 43 points (13 G, 30 A). He has one goal and one assist against UNLV this season. And since January, Lackay has recorded 12 points. Elliott Plourde is close behind with 41 points, but does lead the team in goals with 15, with six of those goals being game winning goals. Forward Brendan Studioso also stands out with 35 points to his credit (13 G, 22 A).

In net, Bronson Moore leads the Sun Devils yet again and having a much better season between the pipes. In 18 games played, he has an impressive 15-3 record, 2.57 GAA and .923 save percentage. And in his only appearance vs UNLV this season back in Tempe, he is 1-0.

UNLV and ASU played a two game series way back in September and split the series. ASU won the first game 3-1 with UNLV winning the next night 4-2. Jake Saxe, Paxton Malone and Jayson Dimizio (twice) scored in the winning contest. Kane Toriumi scored the lone Rebels goal in the 3-1 loss.

Keys for a Rebels Victory

- Strong Defense: The Defense was really strong in the Friday game vs. Arizona, especially in the final minutes when the Rebels were ahead a goal. If they play strong defensively, ASU will have a tough time coming away with a win in Vegas.

This weekend, the Rebels are supporting First Responders and members of the Military, current and retired. First off, all current and retired First Responders and Military members will get in free both nights with each additional person in their party being only $10 each. This deal is only good in person and not online. The team will also be wearing special jerseys which will be auctioned off via the team’s social media pages after the game. Half of the proceeds from the jersey sales and 50/50 raffle will go to the LV Emerald Society on Friday night and LV Police Sentinels on Saturday night. There will also be a limited number of these special jerseys available for sale at the game as well.

The Rebels are adding some VGK flair to begin things on Friday night as Malcolm Subban, fresh off the big OT win over the St. Louis Blues on Thursday night at T-Mobile Arena will be dropping the ceremonial first puck. Golden Knights anthem singer Carnell Johnson (aka “Golden Pipes”) will also be on hand to sing the National Anthem before the game on Friday.

Once a Rebel, Always a Rebel

The UNLV Hockey Alumni, consisting of former players, will be in attendance for Saturday’s Game.

Tickets are available at rebelhockey.com/tix for just $15 , $5 for kids under 8. Kids 5 and under are free, as well as UNLV Students, who get in for free with a valid student ID.

The games will also be live streamed on the UNLV Hockey YouTube page with Dana Lane behind the mic. Make sure to also follow along throughout the weekend on our social media pages for game updates and other content from this weekend’s action.