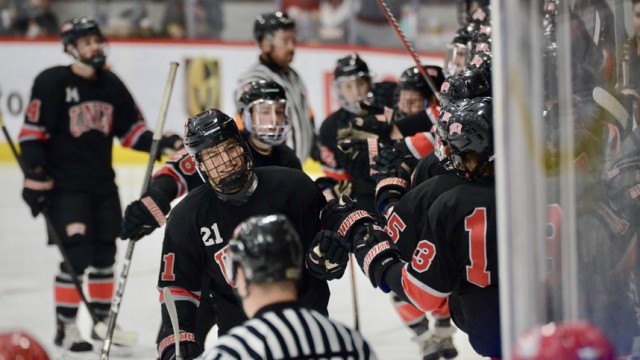 Skatin’ Rebels Earns a Split with University of Arizona Wildcats

LAS VEGAS- UNLV begun a stretch of six straight homes games with a weekend matchup with 5th ranked Arizona Wildcats at City National Arena. The results of both games were the same, except who won each night.

UNLV came away with a back-and-forth 4-3 win over Arizona on Friday; then Arizona had to hang on to a late UNLV attack to secure a 4-3 win the next night.

Friday’s game was a game of quick responses as both teams responded quickly after the opposing team scored. The scoring started in the second period as Wildcats captain Anthony Cusanelli put home an unassisted goal at 3:06 of the period. Then, only 21 seconds later, Hunter Muzzillo and Kirk Underwood set up Jayson Dimizio’s seventh goal of the season to tie the game at one. Later in the period, the teams would quickly trade goals again as Bayley Marshall scored unassisted at 9:34 of the period. Twenty five seconds later, Paxton Malone, with assists to Eric Williams and captain Bas Assaf, beat Cirruro to tie the game at two.

In the third period, Cusanelli would strike again for the Wildcats to regain the lead at 3-2. However, as has been the case all night, UNLV would quickly counter with a goal 50 seconds later thanks to Jared Turcotte’s seventh of the season off the sticks of his line mates Toriumi and Malone to even things back up at three goals each. Then again, not even a minute later, Nick Flanders beat Cirurro to give the Rebels a 4-3 lead. And this time Arizona would not have a quick response, in fact they wouldn’t score again at all and the Rebels held on to beat the fifth ranked team 4-3 in front of a sell out crowd at City National Arena.

Saturday’s game would feature a slight change in the goaltending matchup as the Wildcats decided to start Nolan Bivolvic and UNLV sticking with David Anderson in net. Arizona capitalized with two goals past Anderson in the first ten minutes of the game. UNLV responded with a goal by Paxton Malone, his second straight game with a goal and 15th of the season, to cut the lead to 2-1. That goal was scored approximately two minutes after the second Arizona goal, showing the great response and fight UNLV has been able to inject all weekend. UNLV would tie the game at 5:34 of the second period off the stick of Brendan Manning. It was looking like that game would head into the intermission tied, however, Arizona had other ideas as the Wildcats scored with less than two minutes left in the period to go up 3-2.

The teams would trade a goal in the third period; Arizona extending their lead with a goal at 5:53 of the period. Then, the Rebels with great opportunities, with power play chances late and with the goalie pulled to make it a two-man advantage. The Rebels were able to get one goal thanks to Saxe setting up John Moeller, but were unable to put home the tying goal in the final seconds of the game, and the Wildcats survived to win 4-3 and forcing a split of the weekend series, ending UNLV’s five-game winning streak in the process

UNLV finishes the game 2-for-6 on the power play (3-for-7 for the series); they were however uncharacteristically out shot by their opposition, 43-35 in Saturday’s game.

The home stand continues this weekend as the Rebels host the 14th ranked Arizona State Sun Devils as part of First Responder and Military Appreciation Weekend. All current and retired first responders and military will get in for FREE both nights with each additional person in their party being only $10 a person. This deal can only be redeemed in person on game night at City National Arena.

The team will also be wearing special jerseys for the game and auctioning them off via social media afterward. A limited number of First Responder Jerseys will be available for sale at the game too.

It is also alumni weekend and the UNLV Hockey Alumni will be in attendance for Saturday’s game.

Regular tickets can be purchased online at rebelhockey.com/tix for just $15. UNLV students, as always get in for free, and can pick up their free tickets on game night with a valid student ID.

Puck Drop for both games is scheduled for 7pm at City National Arena.