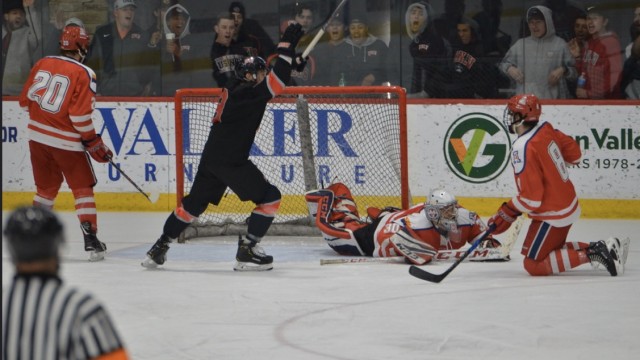 This Weekend at City National Arena, The Skatin’ Rebels (15-11-1) begin the month of February with a stretch of six straight home games; first doing battle with 5th ranked University of Arizona Wildcats (22-3-3) Friday and Saturday Night.

UNLV swept the Utah Skatin’ Utes in a two game series in Salt Lake City on January 25th and 26th. UNLV won the games by scores of 9-1 and 3-1 respectively. UNLV is currently on a four game winning streak.

John Moeller continues to be hot for UNLV. He recorded two goals and one assist in the first game of the Utah series, adding to the three goals he got in the previous game against Minot State. Over the last four games, he has six goals to bring his season total up to nine.

Goaltender David Anderson has also been strong in net since transferring to UNLV from Jamestown during the semester break; a 3-2 record in six games with a 2.06 GAA and .910 save percentage. Anderson is expected to be in net again for at least the opening game on Friday night.

Assistant Captain Jake Saxe is leading the team in scoring and is the only twenty point scorer for UNLV (10G, 10A) to this point. Kane Toriumi (19 pts), Paxton Malone (18 pts), Jared Turcotte (18 pts), and Jayson Dimizio (18 pts) are also knocking on the door of reaching twenty points.

The Arizona Wildcats come into City National Arena with an impressive 22-3-3 record. Most recently, they are coming off a 3-0 trip in Colorado last weekend in which they defeated Colorado State and Colorado. They are currently on a seven-game winning streak. As a result, they are currently ranked fifth in ACHA rankings. Arizona is part of the WCHL conference and is looking the capture the conference title for the second straight season. UNLV will be joining that conference starting next season.

The Wildcats have been led by all season by their captain, Anthony Cusanelli. In the two games versus UNLV this season, Cusanelli has two goals and one assist for three points. He scored the winning goal in the first game of the series with UNLV back in November in Tucson, a 2-1 win for the Wildcats. For the season, he has recorded 32 points (16G, 16A). Bayley Marshall will be another player to watch out for the Wildcats. In the prior series with UNLV in Arizona, he recorded four points (1G, 3A). Marshall has 28 points (13G, 15A) overall for the season.

Arizona also finds themselves with two strong goaltenders on their roster, both ranking in the top 10 in the ACHA. Anthony Cirruro has seen the bulk of the action for the Wildcats. In 17 games played, Cirurro is 14-2-2 with a 1.93 GAA and .928 save percentage. That is good enough for seventh in the entire ACHA. In the two games prior versus UNLV, he is 2-0, only allowing two goals on 70 combined shots.

Nolan Bilolvic, appearing in ten games this season has amassed an impressive 2.08 GAA and .913 save percentage, good for tenth in the ACHA goalie rankings. His most recent appearance was in Colorado on February 1st, where he stopped 15 of 16 shots on the goal for the Wildcats win.

Continue to Buy-in: It may seem cliche, but to have success you need to believe you can achieve your goals. An ACHA tournament berth could become a reality with these victories against a top ten team. Use of their speed and getting north right away on the ice will be key too.

Don’t take this opportunity for granted: Arizona is ten spots ahead of UNLV in the rankings and good games this weekend can really help the Rebels continue to climb up in the rankings.

Defense, Defense, Defense: Arizona’s goaltending doesn’t give up much generally so scoring could be hard to come by, so playing strong defense on the other end will go a long way to keep these games close.

The team needs you fans to show up to City National Arena Friday and Saturday night and to be loud! Puck drop is scheduled for 7pm both nights. Tickets are $15, with UNLV students being free. Saturday night is our Family Night. Fans can purchase a group of four tickets for only $20, with each additional ticket costing only $5. Tickets under this promotion can only be purchased at the door at CNA.

For those who can’t be at the game, make sure to watch the live stream of the games on the UNLV Hockey You-Tube channel. Make sure to also follow along on our social media pages for updates and content throughout the weekend.