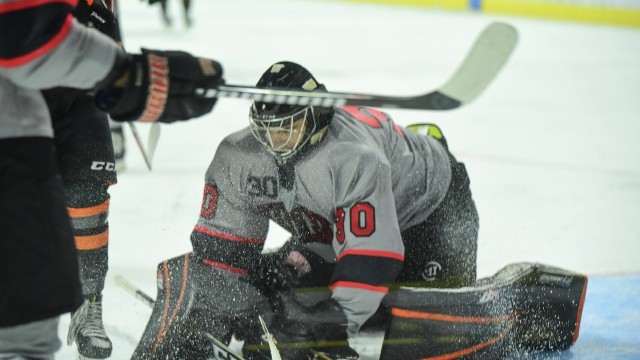 In Friday’s contest, UNLV managed to overpower the Utes, outshooting them 13-3 in shots on goal and putting five goals past Utah starting goaltender Jake Slaugh, who only lasted 11:21 before being pulled for Landon Anderson. After the Utes scored a power play goal in the second period to make it 5-1 Rebels, UNLV scored the last four goals in the game for the 9-1 win.

John Moeller, who had a hat trick in the last game vs. Minot State, had another outstanding game in this one; recording two goals and one assist. Daniel Fisher also had himself one of his best games of the season; registering two goals, brining his season total up to three, adding one assist in the process for a three point night. Assistant captain Eric Williams (3A), Jared Turcotte (2G, 1A) and Jared Erickson (1G, 2A) all finished the night also with three points.

Saturday’s contest featured an Anderson vs. Anderson matchup in net and both would be up to the task. Resulting in a much closer affair then the night before as the message before the game was to not let this game be a trap game for UNLV.

Utah started the scoring in the first period, but then Angelos Tsalafos lit the lamp roughly three minutes later to tie the game at one with his fourth goal of the season. Despite UNLV outshooting Utah 15-5 in the second period, Landon Anderson would keep the puck out of the net for Utah. David Anderson, who wasn’t tested nearly as much, did the same on the other end of the ice. This one would be decided in the third period as Brendan Manning scored 2:08 into the period, giving UNLV the lead. Jake Saxe added an empty net goal with ten seconds remaining to secure the UNLV season sweep over Utah with a 3-1 victory.

The win puts the Skatin’ Rebels winning streak at four games and improves the overall record to 15-11-1. The road record which was a less than stellar 2-7-1 coming into the weekend is boosted with the two wins over the Utes,  to a 4-7-1 mark away from Las Vegas.

David Anderson, in his six appearances for UNLV since coming over from Jamestown during the break, is now 3-2 with a 2.06 goals against average and .910 save percentage.

With the wins, UNLV has also moved up to #18 in the latest ACHA rankings, which were released Wednesday.

Next time UNLV will hit the ice for a game will be in February when they will host tenth ranked University of Arizona in a two-game series starting Friday, February 7th at 7pm at City National Arena. The team will be honoring the Lou Tavano family during the weekend, who has ties to both UNLV and UofA, including donating money to both programs. In addition to that, the UNLV Wrestling team is scheduled to be in attendance for Saturday’s game.

Tickets are just $15, with UNLV students being free with a valid student ID. Tickets can be purchased at rebelhockey.com/tix as well as at City National Arena on game days.